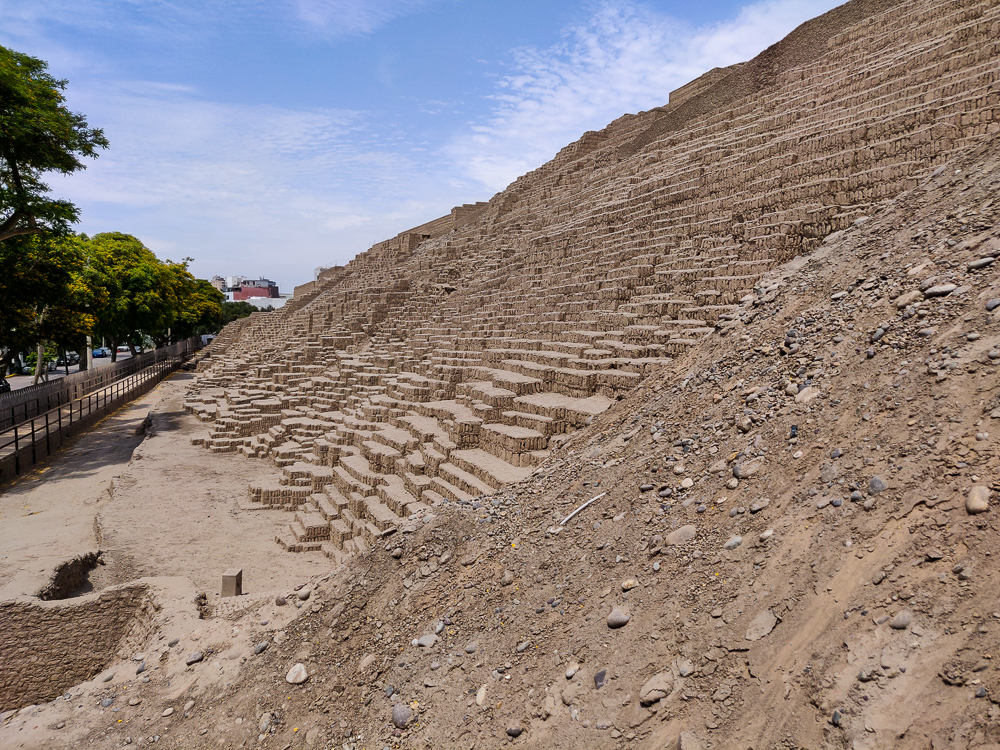 Our 7:20AM flight from Cusco to Lima (Peru’s capital) had us waking up bright and early the morning after our adventures in Tipón. Jocelyn picked the flight (thanks a lot, Jocelyn) because she and Benjamin were leaving that evening, and she wanted to be able to sightsee in Lima before their flight out. To take advantage of their limited time, we landed, took a taxi to our hotel, dropped off our bags, and headed right back out. Well, it maybe happened a liiittle more slowly than that… there was crazy traffic, aka typical Lima traffic, on the way from the airport, and then we took a couple of minutes to collect ourselves at the hotel before setting out for our major destination of the day, Huaca Pucllana (pronounced waka pook-yana).

To this point, we’ve talked a LOT about the Incas and visited a LOT of Inca ruins. Obviously, though, the Incas weren’t the only pre-Hispanic civilization in Peru. The first known civilization emerged around 1200BC, the Incas showed up around 1200AD, and there were dozens and dozens of others in between. One tour guide at Huaca Pucllana said that they had to learn about something like 26 pre-Hispanic civilizations in school. Geez! (Meanwhile, U.S. history covers about 250 years, and we still never managed to get through it all in one school year.) So, Jocelyn and I insisted that even though we had visited about ten different ruins in five days, we still had to visit at least this one more.

Huaca Pucllana was built by the “Lima people” a society that developed on Peru’s central coast around 200AD and lasted until around 650AD. The society was governed by a caste of priests that ruled over the people and acted as intermediaries to the gods. People were mostly fishermen or farmers and made their own textiles, tools, baskets, and pottery. They lived in small, scattered communities, but they worked together to build and maintain irrigation channels to support agriculture, and there was a “labor for taxes” system, similar to the one the Incas had (which enabled them to build all of those grand but labor-intensive structures). They also built a series of ceremonial complexes which acted as centers for religious, political, and social activities.

Huaca Pucllana was one such complex, built over hundreds of years during the height of the Lima people, from ~450-650AD. The main structure takes the form of a truncated “pyramid” with seven different levels reaching a total height of 72 feet (22m) and is surrounded by open space and shorter structures that were used for meeting space and storage. The site today is about 1/3 of its original size.

Jocelyn and I had already visited Huaca Pucllana many times before because it’s one of the sightseeing stops for teams when they visit Esperanza de Ana for service trips. These many visits gave us the benefit of learning from a variety of tour guides who all focused on different things and supplied different information. Eventually, we started whispering extra details to our group or sometimes asking the guide leading questions if we thought they were leaving out something important (okay, mostly just I did that). By the time we were there with our families, we probably could have given the tour ourselves. Most of the information in this post is from the various tours we took (because I’m a nerd and take notes on tours), so prepare yourself for an authentic tour experience.

Construction of an important site such as Huaca Pucllana was initiated with a sort of “groundbreaking”. In the case of the Lima people, it was a religious ceremony where a priest broke a large jar with a rock. Then, the people got to work. The pyramid is made of mud bricks, composed of river stones, crushed shells, dirt, and water. These bricks fared well in Lima’s humid climate, as the bricks absorb humidity and are strengthened by the moisture, and the calcium in the seashells also increases the bricks’ compressive strength. Each brick was handmade, as one of our guides repeatedly stressed, “They were made by hand. No molds! By hand only. No molds!” The general process was to mix the ingredients, wait a few hours, shape the mix into bricks (by hand! No molds!), and then sun-dry them.

The dried bricks were then lined up next to each other in a “bookshelf” configuration. This construction method is credited for the survival of Huaca Pucllana through Peru’s many earthquakes as the orientation of the bricks and space between them allow the pyramid to move with the earth and then settle back into position. It also doesn’t hurt that the pyramid is completely solid inside. There are no secret passageways or hidden rooms. It was simply a way to get closer to the gods via vertical construction.

So, I mentioned that they wanted to get closer to the gods, but which gods exactly? There are a few clues… though clearly they were deciphered by someone who knows more about this stuff than I do because none of them seem like great clues to me. First, the pyramid was originally painted yellow with a blend of limestone and fish oil. As it was explained (apparently this is a logical progression): yellow is the color of women, and the moon is a woman. (In contrast, red = man = sun god.) Second, many of these people were fishermen, and the ocean is a woman, so it’s also dedicated to the ocean goddess. Third, evidence of human sacrifices was found in the main square (we’ll come back to this), and most of them were young women. Women symbolize fertility. People came seeking abundance: fertile soil, successful fishing, rain, etc. In conclusion: it was built for the moon and ocean goddesses.

Most people never ascended the pyramid. That was a right reserved for priests and the most important people only. The common people would have gathered in the main square for feast days, markets, and to discuss major events (like in a Greek agora or Roman forum). Another, less common, use of the main square was for human sacrifices. This would only happen in times of great difficulty, like a drought or famine, maybe every 20-30 years. Our tour guides gave varying information on this, so I’ll give you a couple of versions. One said that around twenty remains were found, and all but one were the remains of young women. The last was a boy dressed in women’s clothing. The theory is that girls were sacrificed to appease the women goddesses, and the boy was disguised as a girl because his family had no daughters to contribute. Another guide said nothing about the sacrifices until I asked, and then his face lit up and he said, “Ah yes. Sometimes people drink the hallucinogenic drink, decide it’s a good idea to make sacrifices. They stone some people, lance them up here until they bleed out, and then cut their bodies apart.” I gaped at him… after only hearing the previous guide’s description, I was NOT ready for that. So, who knows how exactly it happened, but there are two options for you.

Moving up the pyramid, we reach the “Plaza of Small Holes” filled with… small holes! There are over 2,500 holes that contained small offerings of food or items used in textile manufacturing. It’s believed that these were offerings to the dead, intended to garner favor for the offeror.

After the Lima people moved out of the area, the pyramid was left abandoned for a century until a new society moved in around 750AD, the Wari people. They repurposed the pyramid, converting the upper levels into sacred burial grounds for the elite. The Wari mummified their dead. The body was placed in a curled-up sitting position, with arms and legs bent. It was then wrapped with leaves and linens, and ropes were tied around it to make a tight bundle. Some people were also placed in baskets. A false head of cloth or wood was placed on top, the person’s new face for the afterlife. One Wari tomb contained two adult Wari mummies and a Lima child, possibly a sacrifice intended as a servant in the next life.

The Wari people used the site until around 900AD, and eventually, the Ychsma (eech-mah) people moved in and adopted it as their own ceremonial and burial site around 1100AD. The Ychsma participated in ancestor worship, and offerings of human hair, toads, and clay figures have been found. Toads… why toads? Because they represented water and moisture which were important for the success of their crops. They buried their dead in shallow graves with “grave goods” like pottery, food, and other tools or objects deemed useful for the afterlife.

By the time the Incas arrived in the mid-15th century, the site was hidden and forgotten. Forgotten? How can a 45-foot-tall pyramid be forgotten? Well, somehow, it turned into a giant dirt pile. There are different theories about how this exactly happened. Maybe it was through natural causes. It eroded and dirt simply accumulated there until the pyramid disappeared from view. Another theory is that the people, knowing that they were going to be conquered, covered it with dirt to hide it, as a way of protecting their sacred monument from the invaders. Honestly, both of these theories sound insane to me, but the only thing that’s certain is that it was, in fact, covered.

Hundreds of years passed, and no one knew that the mountain of dirt in the city was anything other than that. It was being used as a dirt bike course. In the mid-1900s, as Lima expanded and new development projects were planned, the ruins were rediscovered. Archaeological efforts seriously began in 1981, it was declared a protected site in 1991, the first intact graves were found in the 2000s, and excavation work continues today. One of the guides said that it should be fully excavated in 20 more years. Oh, that’s all?

The group was skeptical when Jocelyn and I said that these ruins were different from ALL of the ruins we’d seen thus far, but after the tour, everyone agreed that we had been right. Obviously.

Next time, I’ll talk about the rest of our adventures in Lima!

Qorikancha – compare the mud bricks of Huaca Pucllana to the precise stonework of the Incas’ most majestic religious complex, Qorikancha

Cusco Adventures: Q’enko and Saqsayhuaman – walk around some of the Incas’ important religious and ceremonial sites