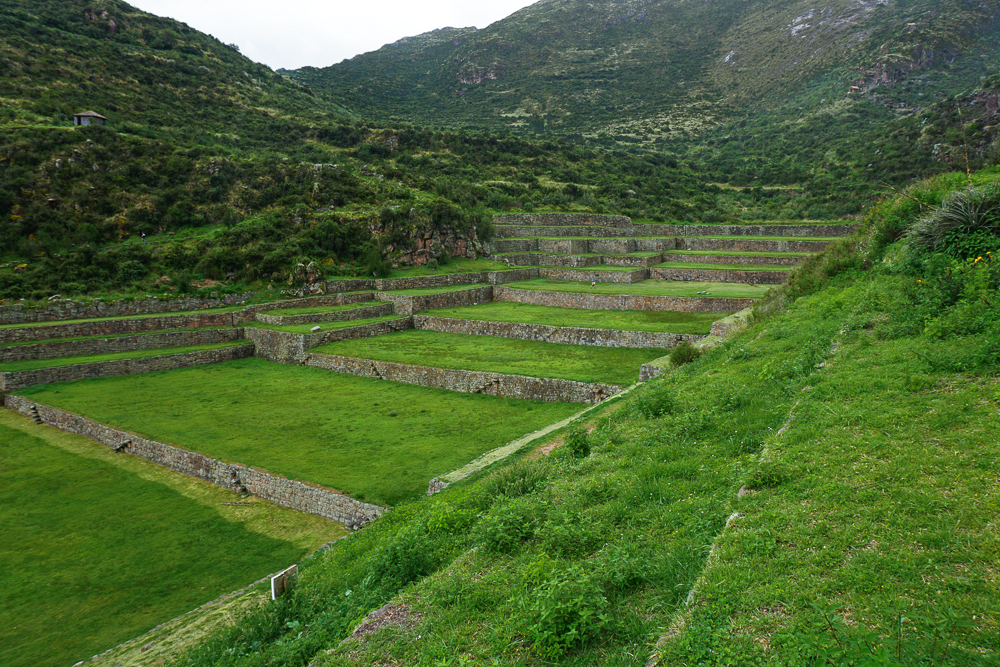 We had one final day in Cusco after we returned from our marathon day at Machu Picchu, and I was struggling to decide how we should spend it. There are about a million different things to do and see in the Sacred Valley, and they’re all amazing. Well, I obviously haven’t done everything, but there isn’t a single thing that I HAVE done that I thought wasn’t worth the time. Anyway, the point of this ramble is to say that if you ever go to Peru and have the time, don’t just rush to Machu Picchu! Hang out in Cusco, explore the less famous sites, and don’t assume that the lack of fame means they’re not awesome.

My decision was also hard because I was choosing between places I hadn’t been to. That was exciting because it’s always fun to go somewhere new, but I was making the decision for everyone and wanted to choose well. In the end, I decided that we should go to Tipón, another Inca site about 45 minutes away from Cusco. I didn’t know much about it, but I did know that it’s considered an engineering marvel and there are cool water features. Like I said, not much… but actually, that’s about the extent of what they know for sure, so not bad.

I wanted to take a bus to Tipón, mostly because I wanted everyone to experience public transit, and it seemed like a straightforward opportunity to do so. There was no one at the hotel desk to direct us to a bus stop, so we put our faith in our internet intel and headed out. When we got close, a lady on the street pointed us to the correct bus stop and said that we shouldn’t have to wait too long. We waited about 10 minutes for a bus, I worried for all 10 of them that we were in the wrong place, and then I worried after we got on that it was the wrong bus… even though the bus said “Tipón” on it, AND I double-checked with the driver. I apparently put a lot of pressure on myself as the planner of other people’s trips, but I wanted everything to go smoothly!

As we got off at the final stop, the bus driver pointed us in the direction of the ruins and said it was probably best to take a taxi there. We took his advice, thank goodness, saving us from a brutal uphill trek on a skinny, winding road. After the taxi dropped us off, I worried briefly about how we’d get back down and then decided to leave that for future Lara to deal with.

According to archaeological evidence, Tipón was occupied for thousands of years before the Incas arrived, dating back to sometime between 6000-4000BC (very specific). The Incas then developed it into what it is today: a water ritual garden… or a royal country residence… or an agricultural lab… you know, the usual “well, could be anything”. Very little is known for certain about Tipón; even the original name was lost. The only written reference comes from a 16th-century chronicler. He describes a site that could possibly be Tipón, and it says that the complex was built as a royal palace for an old Inka after his son usurped him and booted him out of Cusco. I suppose luxurious house arrest was a kinder sentence than death.

The complex is up in the mountains, built into a dip between two peaks. It consists of twelve terraces (some sources say there are thirteen, but I counted twelve) edged with stone channels that direct water around the site and into waterfalls from terrace to terrace. The water comes from a spring over a kilometer away, brought to the site through the mountains via a series of aqueducts and channels.

All Inca sites show evidence of water management systems, but Tipón is special. First of all, it still functions! Of course, after years of neglect, there was some cleaning/plant clearing to be done, but isn’t that amazing?? You can hike to see the channel that carries water down from the spring, and the channels and waterfalls around the site are still going strong. Second, the design feels more epic, more monumental than at other sites. It’s not just functional; it’s like a celebration of water.

The agricultural terraces at Tipón immediately stand out as different. Take another look… what do you notice about these vs. the terraces at Machu Picchu, for example?

The most obvious answer is that they’re huge. Each one creates a massive area of farmable land, rather than the little slivers we’re used to. Beyond that, the Incas generally built their agricultural terraces to follow the topography. At Tipón, however, right angles and straight walls are imposed on the landscape. It’s very orderly and precise, contributing to the belief that it was an important religious site. That would mean that design decisions were likely also symbolic. The twelve terraces (if there are truly twelve), for example, could represent the twelve months of the Inca solar calendar. There’s a main fountain near the high point of the complex, and as the water flows down, it splits from one stream of water into two (possibly representing heaven and earth), then into four (which could be the four elements), and finally combines back into one to flow into a ritual pool.

I don’t think it’s possible to fully appreciate the experience without also being able to hear it, so check out this video!

And more of the infinite pictures I took…

We took our time exploring, and even so, we only saw a small portion of the complex. We visited the main section only, consisting of the primary terraces and fountains, the royal residence, and some other, partially excavated ruins that may have been military-related or simply other support buildings for the site. If we’d had more time and were willing to do some hiking (everyone was still feeling exhausted from our long day at Machu Picchu, so we opted for a lower-intensity day), we could have visited the Intiwatana (Sun Temple) and the water reservoir on the lower peak. On the high peak, Cruzmoqo, there’s a cross, a view of the valley, and ancient petroglyphs. The Incas also used this point for a military observation post. There are 15 foot-tall (4.5m) stone walls around the complex that were probably built by a previous civilization, before the time of the Incas. Unexcavated dwellings, terraces, and storehouses dot the mountainside, and an old Inca road still zig-zags its way to the site. Around the back of the mountain, there’s another terraced area that is similar to the main terraces, but it hasn’t been excavated or restored as much.

Okay, just one more (slow motion) video showing the impact of the splash stone (the technical name, I’m sure):

As soon as we were ready to head back to town, I shook my head at past Lara’s decision to leave the taxi problem to me. Despite its awesomeness, Tipón isn’t very popular which means that there aren’t just taxis hanging around, waiting to be hired. Why hadn’t I asked for the taxi man’s phone number when he dropped us off? I had no idea what we should do. Luckily, a car pulled up a few minutes later, and a young Peruvian couple started to get in. Benjamin said, “This is our shot!”, and ran over to get the driver’s attention. I asked if he had space in his car for us, that we had five people and wanted to go back to town. He said sure and charged us two soles each. I would have paid anything. Thank goodness for outgoing travel companions!

On the way down, I asked the driver if he knew of a good place to eat cui (guinea pig). Tipón is the “cui capital of Peru”, and Benjamin was determined to try it. After he left the other couple in the main square, the driver took us to a restaurant, confirmed with the lady there that she had cui, and assured me that we’d be able to get a bus back to Cusco from there, no problem. The restaurant was clearly not used to tourists… there was no menu, and the lady who took our order (AND cooked the food AND carried a baby around on her back the whole time) spoke the world’s fastest Spanish as she listed our options. It made my head spin. After she repeated it about three times and I asked approximately twenty clarifying questions, Dad and Benjamin got the cui, and Mom, Jocelyn, and I opted for a pork dish. I had tried cui before, and I’d describe it as slimy chicken. It was fine, but I don’t need to have it again.

When we finished eating, we started walking to the main road. A bus pulled up before we even reached the corner, honking and with the money-collecting guy waving his arms and yelling, “CUSCO!” at us. So, we waved back at him, ran over, and hopped on. Phew! I didn’t even have time to worry about a bus never coming. Back in Cusco, we headed back to the hotel, packed our bags, and had a quiet night. Our flight back to Lima was early the next morning, and everyone was exhausted.

Machu Picchu: The Citadel – walk around the Incas’ most famous site