Another weekend, another adventure! This is Amber and Sosane’s last weekend, and they decided we should go to Kokrobite, a beach town about 30 minutes west of Accra. I’m just happy to be somewhere away from Frankadua to have a chance to finish my mental reset. I feel a lot better than I did at the beginning of the week, but I think that it will be good to have a couple days of a change of scenery. The group for the weekend is Amber, Nico, James, Sosane, three soccer guys, and me.

The trip here was NOT simple, and I honestly don’t think that I could do it again on my own. We had a few guys from the soccer team with us who knew the way, and thank goodness because there was a lot of walking between tros and weaving through crowded streets. We took one tro from Frankadua to somewhere around Accra, another one from there to another somewhere around Accra, and the last one from there to Kokrobite. I know, that was so amazingly detailed that you’re thinking you could probably do it with your eyes closed. 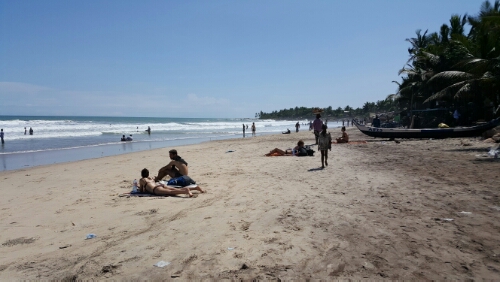 We didn’t leave home until probably 11AM, so we got to the hotel around 3PM, took a little time to get organized, and went to dinner around 5. James has been to Kokrobite before, and he led us to this food stand about 10 minutes away where we got some awesome fried chicken and rice. Afterwards, we played cards until it got dark. Sosane and James aren’t all about President like we are, so we played a game that they called Blackjack (as far as I can tell, it’s basically Uno with regular cards). What do people do for fun without cards? I love that that’s our go-to activity. This really does feel like summer camp sometimes. 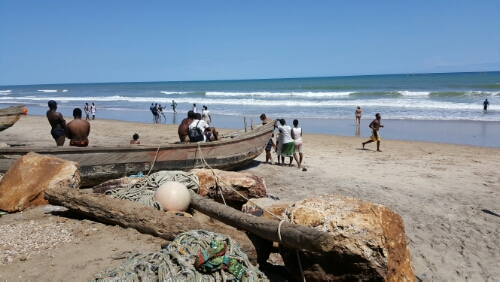 My favorite part of the day was walking on the beach at night. I think it was something about the moon and the clouds and how they looked from the ground, but as soon as I walked out onto the sand, it took my breath away. The moon was bright and directly overhead, and the clouds were kind of splotchy and made the sky really seem like it was a dome. I felt like a tiny molecule inside a water droplet. Sometimes it’s nice to feel small because it puts life into perspective. I’m just a little bitty part of a much bigger picture.

Anyway, I’m excited for some chill time tomorrow. I’m going to pass out any second, so I should just do myself a favor to go to bed.