We’re approaching the time in my trip when all of my best friends start leaving I get sad and have to begin the whole friend-making process again. Ugh. Hopefully I can manage to keep myself from falling into a moody depression like what happened in Ghana. I think I’ll be okay, but still, I’m not excited about having to find new people who are on the same page as me. It’s not as easy as you might think.

Anyway, the point of that whole rant is that the first person from our crew to leave was Shant, and his final wish was for us to go hiking and camping in Dilijan National Park. Dilijan is a 240 square kilometer national park. It was established as a nature reserve in 1958 and was changed to a national park in 2002. You know what the best part of Dilijan is? THERE ARE TREES! Yeah, yeah. I know that sounds stupid, but I miss forests. Dilijan has plenty of trees, and it made me very happy.

Are you ready to hear a ridiculous story that supposedly explains the origin of the name “Dilijan”? Once upon a time, there was a shepherd named Dili who fell in love with the daughter of his master. Obviously, since this is how these stories go, the master was wholeheartedly against it and ordered Dili killed! Seems like a dramatic response to me, but well… yeah. Anyway, Dili’s mother searched for him for days and days, wandering around and calling out “Dili jan! Dili jan!” (If you recall, people use “jan” as a term of endearment after someone’s name or sometimes just in place of it.) The End. Hehehe that might be one of my favorite Armenian stories yet.

Anyway, one of our friends from Gyumri is spending a month working with the Transcaucasian Trail. They’re planning to build over 3,000 kilometers of trails in Armenia and Georgia. It’s going to be super cool! (If you want to see the route or read more about it, check out their WEBSITE.)  It’s also going to take nearly forever, but still, anything is better than what they have now. As you may have realized from my many posts about “hikes” I’ve gone on with my friends, there are a ton of cool places to hike here, but very few of them have actual trails, and even fewer have trail markers. Armenia has a lot of potential as a tourist destination for people who are into outdoorsy activities, but it’s much easier to sell that when you have accessible information and actual official trails. 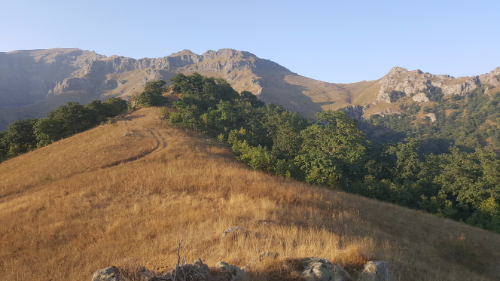 Dilijan is beautiful!! It was on my list of places to definitely visit, so when Shant said that he wanted to go there, I was all about it. We got in touch with our Dilijan friend, and she said that we could camp behind their house and borrow camping equipment. Nice! I’m pretty sure that you can probably just pitch a tent wherever in Dilijan, but this way we didn’t have to worry about renting equipment and carting it with us.

We took the first marshrutka from Yerevan at 9AM and were in Dilijan by 11. After stocking up on snacks and supplies, we walked to the campsite and got our tents set up before heading out for a hike. Since the trail marking is still a work in progress, there aren’t many well-marked options. They have all sorts of maps in the TCT headquarters of the various jeep trails and such that exist around the park, so one of the guys there showed us a route that we could take that had no markers but used existing paths. He said it took him 5 hours which I took to mean it would take us at least 7. He tried to insist that he wasn’t going fast, but that means nothing when you’re talking to someone who hikes all the time. We decided to give it a try, I confirmed the directions to the trailhead about 50 times and took a million pictures of the map, and we were off.

I hate being the navigator. Okay, that’s not a completely fair statement. I like navigating and I’m good at following maps, but depending on who you’re with, having the navigating responsibility can be stressful. If I was with Sarah (best friend Sarah), for example, it would be fun. If we hit a point where we weren’t sure which way to go, we would just try one and turn around if it was wrong, no big deal. It’s all part of the adventure.

Sometimes though, people see pauses and uncertainty as you not knowing what you’re doing, and they lose all confidence in your guidance. That’s when I hate navigating. Following hiking maps isn’t quite as easy as street maps, so sometimes you need to just take an educated guess. There were some parts where I wasn’t completely sure about where EXACTLY we should be walking, but I knew that we were following a river the whole way, so as long as we were close to the river, we weren’t lost.

There was only one part where the “trail” shown on the map wasn’t even close to right. Otherwise, we made some slow progress, but I always knew where we were. We made it to the halfway point after about 3 hours, and I knew there was no chance that we were making it all the way to the end before it got dark. That dude who made it in 5 hours must have been some sort of mutant. Called that. We made a group decision to go a little bit farther so that we could get a good view and then turn around and head back. At least then we would be following a path that we had walked before, and I had a GPS tracker running so we could use that to make sure that we were going the right way.

The view from the “end” of the hike was awesome. There was a great view of the valley, some mountains in the distance, and there were even a few trees starting to change colors already! It would be super cool to go there in the middle of fall with all of the leaves changing.

After spending a little time resting and enjoying the view, we started hightailing it back in an attempt to hit the road before dark. We had flashlights with us, but that’s no good when you’re not following a clear path. There were a few parts of the hike where we were walking through fields, so you had to be able to see ahead across the field to make sure you were walking in the right direction. We were about 5 minutes from the road when it got completely dark, but luckily that was close enough. The whole hike ended up taking something like 5-6 hours, and I was wiped by the end.

We ate dinner in town at the one restaurant everyone always talks about before heading back to the tents. And s’mores. Because what is camping without s’mores? We didn’t last very long after getting back… I think everyone was exhausted. I could have slept on a bed of rocks.