My thoughts for our entire time in Iceland can be summarized into one sentence… “WHAT IS THIS PLACE??” Yeah, I know that doesn’t make it sound like there’s much going on in my mind, but oh well. I could NOT get over the landscape. Everything looked like nothing I had ever seen before and was completely baffling to me.

Many things seem to defy logic. When Mike and I were trying to put together plans for our first day (okay, to be fair, any credit for the miniscule amount of planning that happened belongs to Mike), we looked at going to the Blue Lagoon. If you’ve ever seen the pictures of people in massive hot springs with seemingly unnatural blue-green water, that’s probably where they were. So the question is, “Hmm. Do you want to put on a bathing suit and go outside in this place where a winter coat is much more appropriate? Don’t worry, the water is warm.” Right but then there’s the air. Which is NOT warm. At all. “Want to go sit in some lava-heated water?” LAVA?? Does that really sound wise?

We ultimately decided to skip it (not because of any of my questions) because it’s not cheap (nearly $100 each) and neither of us had any strong feelings about going. The Blue Lagoon takes the output water from a nearby geothermal power plant and feeds it into a man-made pool. I was more interested in hunting down some natural hot springs (because going in unregulated lava-heated water sounds like a much better idea, doesn’t it?). Fun facts though: the mineral-rich water at the Blue Lagoon is thought to help with certain skin conditions like psoriasis (there’s even a research facility there). Icelandic doctors will literally prescribe visits as part of treatment, and patients visit for free. 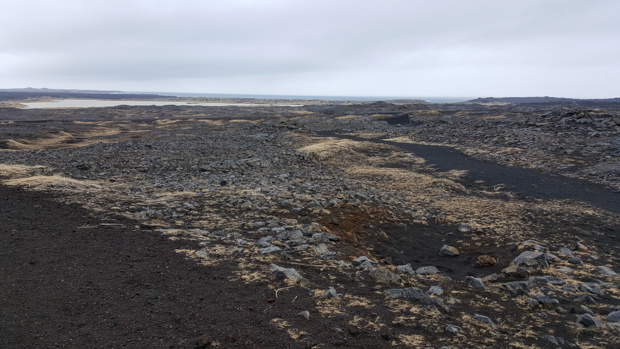 Instead, we went in a completely different direction (geographically and conceptually) and made our way to Garður, once the most populous town in Iceland… but definitely not anymore. Now, the population is around 1,500, and as far as we could tell, the major (only) sights there are two lighthouses. The first was built in 1897, replacing a giant, 50-year-old pile of stones that was used for wayfinding. The second was built in 1944 and is much taller than the first – 28m compared to 12.5m. That makes it the tallest lighthouse on the island, and according to a survey, it’s the second most favorite lighthouse of the Icelandic people. No, I didn’t make that up. These are the divisive questions facing the people of Iceland.

When we got out of the car, we 1. almost blew away because the wind was completely out of control, and 2. got our first glimpse of the Icelandic terrain. Well, make that Icelandic terrain type 1 because as we soon learned, nowhere looks like anywhere else on the island, but everything looks weird. In Garður, there are white sand beaches… but they’re spotted with big black lava rocks, in case you managed to forget for a second that you’re on a volcanic island. If I wasn’t worried about unintentionally taking flight, I probably would have spent longer admiring the combination of pretty blue water, dark lava rocks, and light sand. Fair warning that I’m going to completely overuse the word “weird” anytime I try to explain what anything looked like. But like… weird.

From there, we went to a bridge that’s probably not what you imagine when you think “bridge”. This one doesn’t span a river… nope, it spans the gap between two tectonic plates. Like I explained in my Iceland History post, Iceland is along the ridge between the Eurasian and the North American tectonic plates, so there are a few places on the island where you can see a gorge that I guess is basically a giant earth crack. How weird is that? (I know, I said it again.) This was also where we had our first experience with black sand. I was completely fascinated by it and took a picture of my feet, kicking off my trip-long obsession with Icelandic groundscapes. 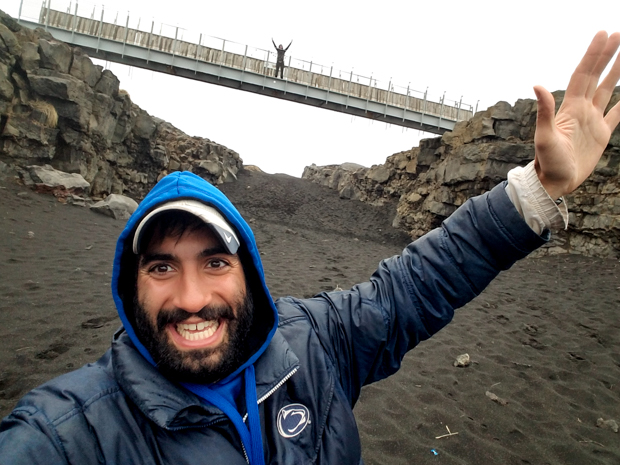 During his research, Mike spotted some craters on Google satellite view, so that was our next target. The only issue was that he wasn’t sure exactly where they were along the road or what they were called… good, right? And you might think that it would be clear, but there are pull-offs and places to turn to see different things about every 5 feet, so the chances of you finding what you’re looking for are slim. We saw a car pulled off the road somewhere, decided to check out whatever they were checking out (this is like 90% of our decision-making process, “Oh, there are a lot of people there so it must be something cool. Let’s go.”), and realized it was Mike’s craters. Of course they have a name, the Stampar craters, because everything in Iceland has a name. Again, weird and spacey, but this time a different planet. There were some places where the rock looked like it had been liquid lava only seconds before. It was cool to be able to see so clearly how it was formed. Also, totally insane because like… lava.

We were exploring the southwest corner for the day, and there’s another popular lighthouse in the area called Reykjanesviti. Let’s take a moment to talk about Icelandic names. I mentioned this when talking about my first impressions of Iceland, but they’re ridiculous so I’m going to rant again. I don’t know much about Icelandic, but it’s one of those languages where they like to mash things together, especially in names, so instead of it being Reykjanes Lighthouse (yes, I realize that’s longer but SHH!), they just put their word for lighthouse, viti, onto the end. That leads to a lot of incredibly long names and a lot of laughing while attempting to pronounce ANYTHING correctly. Usually you get halfway through the word, reach the point where you’re just tired of making so many sounds, and give up. When you’re driving, you read about half of the word and then you’ve driven past the sign so it’s a lost cause anyway.

Anyway, as I was saying. Reykjanesviti. It was built to replace the island’s first lighthouse because they were worried it was going to fall into the sea. So, they blew it up (you can still see the foundations) and built a new one farther inland. The same erosion (caused by a combination of storms, the sea, and earthquakes) that threatened the first lighthouse formed cliffs, Valahnúkamöl (see what I mean about the names??). They are beautiful! We climbed up to the top of one of the cliffs and were mesmerized by the sight and sound of the waves crashing into the rocks. We were also absolutely freezing, and it was windy enough to make you think you were going to get blown into the ocean. On the positive side, it wasn’t raining at that particular moment (it was off and on all day).

The coastline was really pretty, so when Mike suggested we follow some ATV tracks that went out in that direction, I was all in. We walked through expanses of colorful ground plants (I’m not sure if those are natural or if they were planted as part of the efforts to stabilize the soil to eventually reforest) and finally made it to the lava-rocky coast. Again, baffling. I’m not going to waste my time trying to describe it and instead will just direct your attention to the pictures. 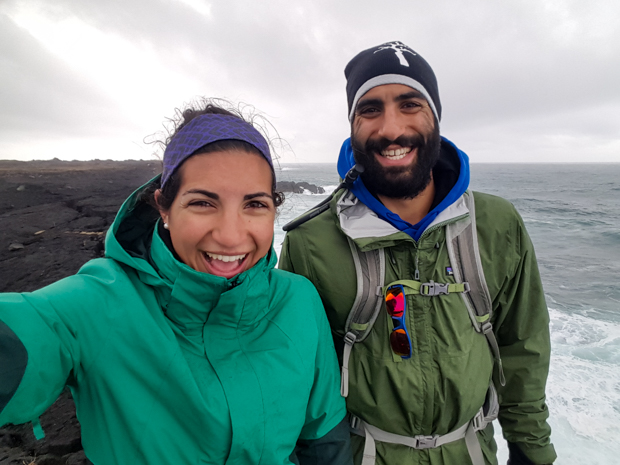 When we’d had enough of getting drenched with sea spray, we kept moving. I think Mike was getting annoyed at me because I was walking like a lost child. I was definitely not going quickly because how was I supposed to walk and take in the fascinating landscape at the same time?? Like I said, every other thought was, “WHAT IS THIS PLACE??” I stepped off the path to see what the ground felt like where the plants were (I know, you’re probably not supposed to do that but I was curious!), and it was like stepping on a pile of cotton balls. No impact, just a slowww sink of your foot.

We eventually ended up at a crater where Mike found a cave opening with ropes hanging down. I’m sure there’s some technical name and explanation for what it is and how it was formed, but I’m going to call it a cave because I don’t know any of that. We couldn’t see very far because it was pitch black. If we wanted to know what, if anything, was down there, our only choice was to go in. We looked at each other, the question hanging between us. I, for one, wasn’t worried about the cave or what was in it. I was primarily concerned about having to trust the sufficiency of my upper body strength to get back out because I haven’t done a rope-climb since elementary school. I don’t know what Mike was thinking, but he didn’t come up with a quick answer either. Explore or play it safe? What do you think we should have done? What do you think we did?

This is a PERFECT time to leave you with a “to be continued…” cavehanger (it’s like a cliffhanger but this was a cave, soo…).