Last time we left off at a tense moment (not really). Mike and I had just come across a cave hole in the ground and were trying to decide whether or not to go in. I could tell that Mike wasn’t sure about it, but if I said yes, he would be all in. He’s used to going on vacation with a friend who is also ridiculous, and the two of them take pride in things like doing two days’ worth of hiking in one day. Knowing that, my general attitude towards the trip was “don’t hold Mike back.” So, I said we should go for it.

We ran back to the car to grab flashlights (and learned our lesson about travelling prepared for anything) before climbing down into a big, open space. It looked like it ended right there until Mike found another hole in the back. That led us into a hallway-like area with a high ceiling, and at the end of that, there was a short hole into one final room at the back. That had a low ceiling and was much wider. The ground was all very soft dirt, and it was the definition of pitch black. Maybe there was a tiny hole that would have let us keep going, but we decided to turn around. Our curiosity was satisfied, and I personally wasn’t interested in getting even dirtier.

Turns out that there was no need for me to worry about climbing out. It was way easier than expected because it wasn’t a hanging rope climb… I just used the rope to support my arms, walked up the cave wall, and found a ledge to stand on while I squeezed out through the hole to the surface.

I’m glad we went. Otherwise we would have spent forever wondering about what was down there and how far it stretched and if maybe it was a passageway to the center of the earth or a troll treasure trove.  (I don’t even know if troll treasure is a thing, but if it is, Iceland would be an ideal place to go looking.) Plus, when adventure calls, I want to be the kind of person who responds with an enthusiastic “YES!” I’m going to say that I passed my adventure test of the day.

On the way back to the car, we stopped at Gunnuhver, a geothermal area. It’s different from other hot springs because it’s so close to the ocean that it uses seawater. The steam coming out is 570⁰F (300⁰C)! Eek! The name of the hot spring comes from a legend. This was our first exposure to an Icelandic legend, and they quickly became another of my favorite things about Iceland.

This story is about a woman named Gunna who lived on a farm owned by a lawyer. She failed to pay her rent, and the lawyer took away the only thing she owned – a cooking pot. Gunna grew furious to the point of madness and died. On the day of her funeral, the men carrying the coffin felt it get lighter, and people heard a voice during the grave-digging, saying, “No need deep to dig, no plans long to lie.” The obvious conclusion to all of this was that Gunna was a ghost, and she soon took her revenge on the lawyer who was found dead and beaten. Gunna continued to wreak havoc on the peninsula, killing the lawyer’s wife and leading to the deaths of others who saw her. Finally, a group of men was sent to seek the help of a sorcerer. He gave them a ball of yarn and explained that if Gunna grabbed the loose end, the ball would roll her to a place where she could no longer cause harm. It worked (because I guess ghosts really like yarn?), and the yarn rolled Gunna into the spring. It is said that those with “the second sight” can still see Gunna following the ball around the edge and screaming as she falls. (Story adapted from the sign at Gunnuhver.)

One of the interesting things about the story, to me, is the fact that since the Icelandic settlers kept such complete records, there’s a census from 1703 that lists her name. So a woman actually existed and lived in the area… and some freaky things happened that may or may not have been caused by her ghost… that’s up to you to decide, but it’s a fact that she lived. Creepy.

The census listing Gunna’s name is one example of the meticulous recordkeeping that allowed the creation of an incredibly complete genealogic database. Nearly all Icelanders can trace their genealogy back to the original settlers. In the early 1990s, an Icelandic software engineer started the first electronic database. This got even further developed in the late 90s when a genetics company signed on. With the help of census data and marriage, birth, and death records, the database is said to include 95% of Icelanders who lived in the last 300 years. It’s been used for genetics research as a way to trace genes to understand how diseases are passed down through generations. The information is available to all Icelanders, so people can see how they’re related to famous Icelanders or their friends and coworkers. When two Icelanders meet for the first time, it’s common to exchange the question, “Who are your people?” as a way to understand someone’s lineage since family names aren’t passed down. There are also jokes about using the database to make sure that no one is dating a family member, but in practice, that’s likely not a problem because most people know their close relatives.

After learning all about Gunna’s demise, we hopped in the car and made it about three minutes before getting sucked in by another sign. This one was for Brimketill, a naturally-formed rock pool along the coast. It looks like a little hot tub (ignoring the facts that the water is frigid and if you tried to sit in it, you’d get crushed within minutes by the waves and the rocks). 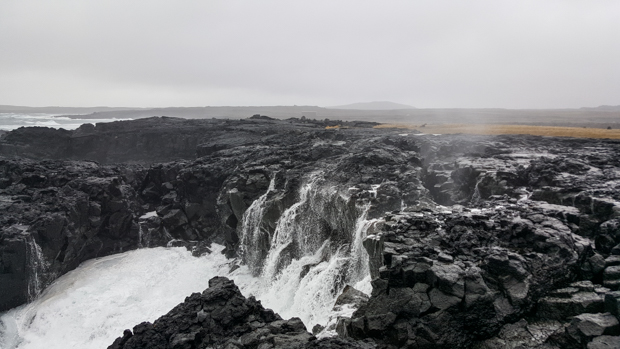 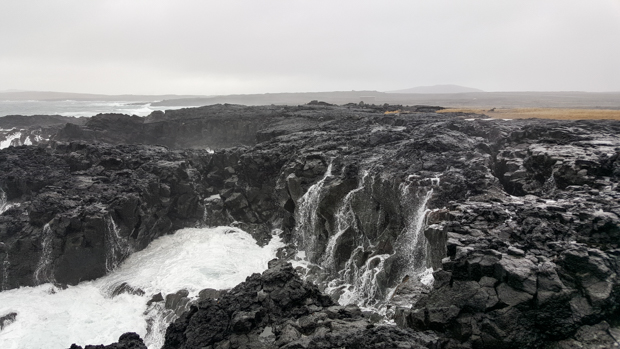 It wouldn’t be Iceland without a troll-related legend about the pool. This one is about the night troll Oddný. She frequently bathed in the “surf cauldron” (that’s what Brimketill translates to), and on one particular night, she went to retrieve a whale carcass that had washed up on shore. On her way home, she stopped for a rest in her pool, and it was so relaxing that she stayed much longer than intended. She rushed to get home before the sun came up, but she didn’t make it in time and was turned to stone. The pool is sometimes also called Oddnýjarlaug, meaning Oddný’s pool, after her. There was a sign at Brimketill that told the whole story, including specific details like where she lived and the names of her husband and son. Those Icelanders don’t mess around with their legends! Or maybe those details mean it really happened, just like the story of Gunna.

We started heading in the direction of Reykjavik and only made two more stops along the way. I’m pretty sure that both of them were unplanned (Mike was driving and did the “planning”, so maybe he knew they were there or maybe it was just luck… I think the latter). We also had to really pep-talk ourselves out of the car because the weather was getting grosser and grosser by the second. Essential Iceland packing list: waterproof jacket. And shoes. And pants.

Despite the fact that one of our stops was at a geothermal area aka where heat from inside the earth is coming up to the surface, it was still freezing. Maybe you have to throw yourself into the bubbling mud in order to feel any warmth. Anyway, the area is called Krýsuvík, and – wait for it – it’s super weird. The soil is multicolored and seems like it couldn’t possibly be natural. Have you ever seen red, yellow, green, and grey soil in the same place? It was baffling. I guess the grey was mud, but still. It was bubbling up like there was a lava monster living under the surface.

There were some hiking trails leading up a nearby hill which Mike wanted to check out, but it was getting late and I was starving and my big toe was still not recovered from whatever I did to it in the UK *facepalm*. And my nose was running because I was trying to fight off a cold. You can’t do it all. (And just like that, my “don’t hold Mike back” mantra completely failed. Oh well.) 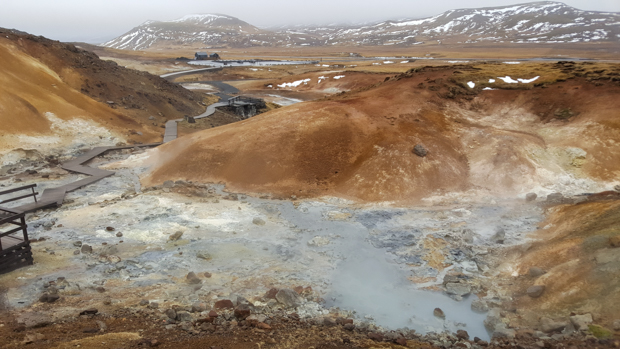 We were sure that we were going to go straight to Reykjavik from there… butttt then we drove past this beautiful lake, Kleifarvatn, and we HAD to stop and get out to stare at it. And then get back in and drive another couple feet and get back out and stare at it again. And touch the water. Temperature report: FREEZING. Mike said that he would swim in it. I stared at him like he must be some sort of alien because my fingertips almost froze off in the one instant they were immersed, and you couldn’t have possibly paid me enough to make me go in there. Plus, there’s supposedly a whale-sized, worm-shaped monster living in it, and I’m not interested in getting ingested by a giant water worm (I’m telling you, if there’s anywhere that the stories of these funky creatures would be true, it’s Iceland). If Mike and I didn’t look exactly the same, I would question our relation. 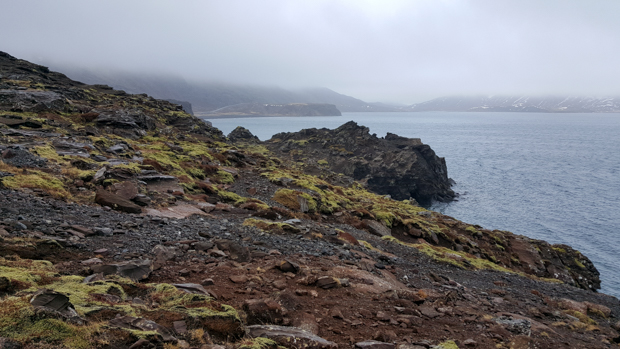 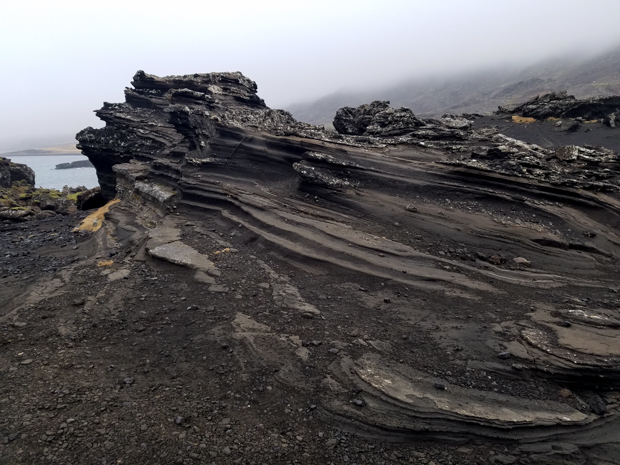 After THAT stop (x4), we went STRAIGHT to Reykjavik to meet up with Mike’s friends, Tony and Alex, who were living in Iceland for a month. We went out to dinner at about 10PM, it was still as bright as day outside, and we ate the most expensive Thai food of my life. The End.