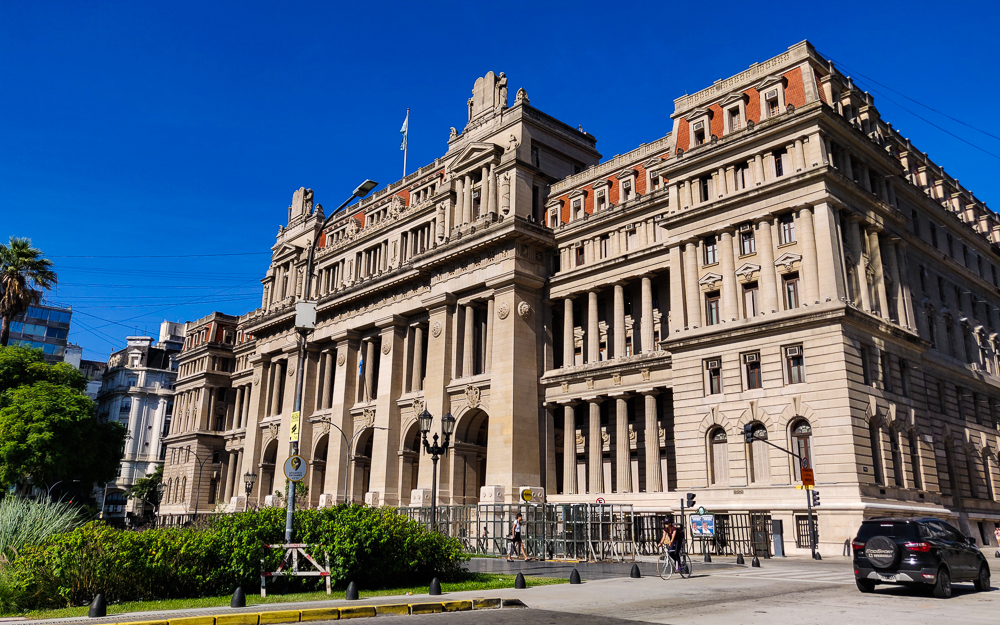 Welcome back to the world’s longest day! I’ve already talked about our morning of wandering and visiting Recoleta Cemetery and our tour of Teatro Colón. When we left the theater, it was only 1:30PM! We grabbed some lunch before heading to our next activity, a city tour. Since I’ve already shared a lot of the things we learned on the tour, between the Argentina History posts and other tidbits here and there, I’m going to take you on my own little city tour. And so, welcome to Lara’s “Random Buenos Aires” Tour!

Let’s back up a little and start our tour at lunch. Mike and I went to Galerías Pacífico to eat, which sounds like it could be a very fancy restaurant but is actually just a very fancy shopping center with a food court. I wanted to go for the architectural experience. Mike wanted to go for the food. How fortunate that, in this case, our interests so easily converged! It doesn’t always happen like that.

Galerías Pacífico was built in 1889 to house a world-class department store, home to the latest international fashions. It was completed just in time for the 1890 economic downturn, and the store never opened. In the following years, the space housed the National Museum of Fine Art, offices for a railway company, and a hotel before being transformed into the current shopping center in 1992 (not-so-fun fact: the basement was also used to hold and torture people during the last military dictatorship).

In 1946, five Argentinian artists were hired to paint murals on the ceiling in the central dome. It’s interesting to see how the varying styles of each artist come through in the different panels!

While Galerias Pacifico is one of the most popular, Buenos Aires has no shortage of beautiful shopping areas. Mike and I also randomly wandered through Galería Güemes, probably while seeking respite from the heat and humidity. It was completed in 1915 and is much smaller than Galerías Pacífico, but the art nouveau architecture (and air conditioning) made it more than worth a walkthrough. You can also go up to the 14th floor for an inexpensive view of the city, but I had no idea about that at the time because that’s what happens when you don’t plan ahead!

On a less high-end note, I immediately fell in love with the interior of Mercado San Telmo, a market. It’s bright and airy inside, and the metal structure gives it some real personality. It was built in 1897 and hasn’t changed much since. The stalls inside sell everything from food and produce to knick-knacks, souvenirs, and antiques. On Sundays, there’s a big flea market in the nearby streets and plaza, but we, unfortunately, weren’t in town to experience that chaos. Instead, we had to settle for walking through at midday during the week. Honestly, that was fine with me. I’m not one for flea markets, and it was nice and empty which made wandering with my eyes glued to the ceiling less hazardous.

Now, let’s fly across town to the Palacio del Congreso (Palace of Congress), the seat of Argentina’s parliament. If you know anything about the structure of the United States government, you won’t have trouble understanding Argentina’s. It’s divided into three branches: executive (President), legislative (Congress), and judicial (Supreme Court). The legislative branch is composed of two bodies: the Senate and the Chamber of Deputies. Each province is represented by three senators (6-year terms) and is allocated deputies by population (4-year terms).

The organizational structure of the legislative branch isn’t the only thing taking hints from the U.S. Does this building look like another building you may have seen before? (Attempt to see past the monument that’s obstructing your view.)

If you said, “the U.S. Capitol Building”, give yourself a pat on the back. The two buildings have a very similar form, but the architect, Vittorio Meano, still managed to give it a style of its own. Meano was also one of the original two Italian architects who I mentioned were involved with Teatro Colón. Unfortunately, he didn’t get to see the completion of either because side story: he was murdered by his wife’s lover when he discovered their affair. Eek.

Construction began in 1896, and the building was inaugurated in 1906… but it wasn’t fully completed until 1946. Whew! There was a lot of time-consuming ornamental work, so even though it wasn’t technically ‘finished’, it was occupied before then. The building is mostly marble and granite with an 80m tall bronze-plated dome, and it faces a large, grassy plaza, Plaza del Congreso.

Only a few blocks from the plaza, there’s one building that towers over its surroundings. Standing 100m tall, Palacio Barolo had to get special permission to exceed the height ordinances when it was built in 1923. Why 100m? To maximize the rentable office space on the site? Silly, of course not! The building is an architectural tribute to the Divine Comedy, a 14th-century narrative poem about Dante’s (the author’s) journey through the afterlife. It’s a prized piece of Italian literature, and the Italian owner and architect turned their passion for Dante into a hulking reinforced-concrete building. Talk about superfans!

The design is completely over-the-top, but it’s a fascinating concept, translating literature into architecture. This is another “maybe someday I’ll go on a tour” building (but they’re not cheap, so it might have to wait until I have an actual income) and then I’ll write a whole post on it. For now, just the basics: The architect pulled various numbers and concepts from the work and translated them into architectural elements. The 100m height corresponds to the 100 “cantos”, or songs, that compose the poem. There are 22 floors for the 22 stanzas in each song, and as you move up the building, you travel with Dante through hell, purgatory, and heaven. The interior is filled with quotes and other decorative details based on elements from the poem. At the very top, there’s a lighthouse that was meant to communicate with its fraternal building twin, Palacio Salvo, located in Uruguay. It was designed by the same architect with a similar style and lighthouse on top… but without the insane Divine Comedy connection.

Okay, back to the government buildings! We’ve covered the legislative branch, and now it’s time for the judicial. The Palacio de Justicia (Palace of Justice) is home to the country’s Supreme Court. I actually didn’t know what it was when we walked by, but I thought that it looked like a fancy/important building, so I took a picture and looked it up later. Designed by a French architect, it’s not as heavy on the ornamentation as the Palacio del Congreso, which allows the symmetry and simple geometry of the building to stand out. It definitely caught my eye! Also, it’s a little intimidating which seems right for a justice building.

Finally, the executive branch. Sitting on the Plaza de Mayo is Casa Rosada, the President’s house. It actually faces the Palacio del Congreso, which is a little over a mile away, a reminder that power is shared with the people (a reminder that didn’t seem to do much for the military dictators of the 1900s). The Plaza de Mayo is named in honor of the May Revolution which, if you remember from our history lessons, launched the Argentinian War of Independence against Spain. Aside from the President’s house, the plaza is surrounded by other important buildings like the Buenos Aires City Hall, the Cabildo (the colonial town council building), and Catedral Metropolitana, the National Cathedral.

The cathedral is the main Catholic church in the city, and the first iteration was built on the site in the 1500s. After building a series of collapsing churches (I assume not intentionally, but there seems to be a theme), the current building finally came to be, albeit very slowly. It was started in the mid-1700s as the EIGHTH iteration of the church, and construction went on for about 100 years which seems to be about par for the course (or even kind of fast) when it comes to building grand cathedrals.

After our tour, Mike and I walked back to our hostel via the waterfront, rather than taking a more direct route. This part of the city was once a port, used for storing goods, but as ships got bigger, a new port was built and the old fell into disuse. In the 1990s, it started being re-developed and became an official neighborhood of Buenos Aires. There’s a walkway along the waterfront that we took on the way home, and it was nice to get away from the more crowded city center for a bit!

We had only a short time to relax after getting back to our room because we had dinner plans! Our dad works for a big, international company, and one of the people he sometimes works with is based in Buenos Aires! She’s around my age, and after some back and forth where she gave us suggestions for things to see and some general tips for traveling in Argentina, we made plans to get dinner together while we were in the city!

She came to pick us up, and on the ride to the restaurant, Mike and I realized for the first time that she and our dad have never actually met in person! We thought that was hilarious, that we were meeting her before he did. It ended up being a ton of fun! She brought along another friend from work, and they did the ordering, determined to give us an authentic experience. They made sure to get some “normal” things like steak and French fries, plus a couple of classics: cow gland and intestine. Mike took on the responsibility of taste tester. He reported that the gland tasted like “less strong bacon” and assured me that I would survive tasting it. Be proud of me… I did it! And decided that his taste description was spot on, but the texture was a ‘no’ for me. Who wants less strong bacon, anyway? The intestine was less positively received. Mike described the texture as “crusty balloon filled with sandy glue”. The others took a moment to think about it and said, “Yeah, that’s actually a pretty good description.” I passed on that one.

We got ice cream after dinner, grabbed a beer (well, except for me), and then headed home once everyone’s eyes started to cross from sleepiness. Our new friend was nice enough to drive us back to the hostel, and I collapsed into bed. When I was like 90% asleep, Mike goes, “That intestine tasted HORRIBLE.” I mustered the energy for a weak, “Okay,” and then I was gone. Sorry, Mike! I laughed about it the next morning, at least.