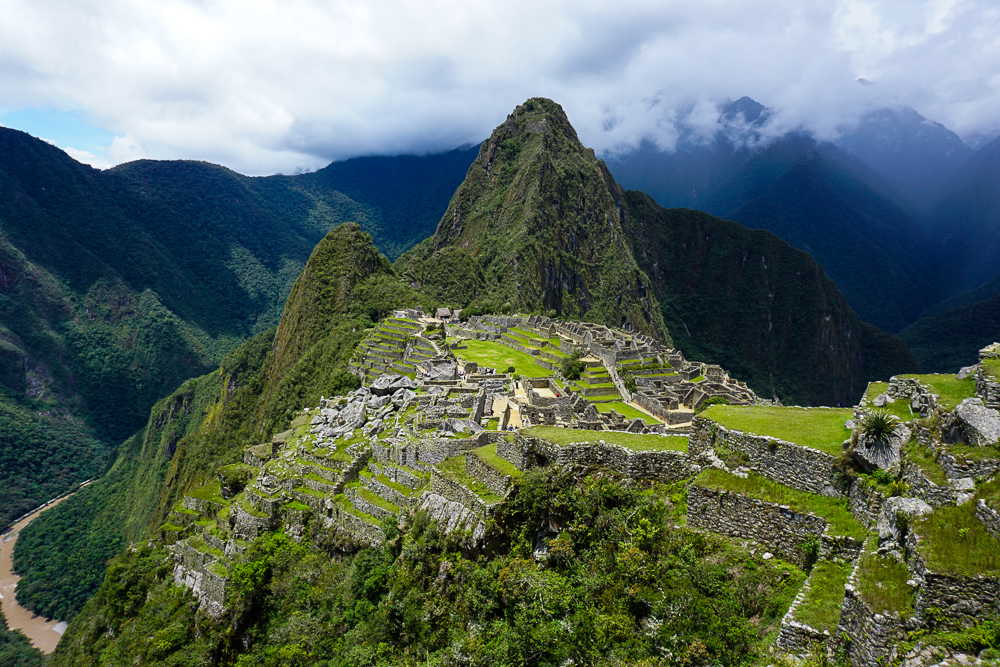 Before I talk about our visit to Machu Picchu, I think it’s important to understand some of the backstory to fully appreciate its awesomeness. Visually, it’s incredible no matter how little you know, but the story is a good one! Remember, though, that the Incas had no written language, so the earliest written accounts of their history come from oral histories recorded by the Spanish. That information is far from comprehensive, so in combination with archaeological evidence, a certain amount has been extrapolated (by experts, not by me). In some cases, there are disagreements about the specifics, so just read along with a big “MAYBE” disclaimer in the back of your mind. Okay! As I was saying…

Our story begins in the 15th century with an attack on Cusco by the Chanca people, a group with military strength comparable to the Incas. The Inka (king) at the time, Viracocha, abandoned his people. He fled the city in fear and took his heir with him. Some king! Another son, Cusi Yupanqui, decided to stay and defend the city, leading the Inca army with one of his brothers and a few other Inca chiefs. They won decisively, crushing the Chanca army and humiliating Viracocha. Having gained the support of the people during the battle, Cusi Yupanqui later declared himself the new Inka, forced his father to abdicate, and changed his name to Pachakuteq which means “earth-shaker” or “he who turns the world upside down”.

If that seems like a bold name statement, well, it is. But Pachakuteq knew that he was destined for greatness. First, as the battle against the Chanca proved, he had an aptitude for military strategy and leadership. Second, as a child, he had a vision where the sun god, Inti, called him “son” and told him that he would conquer many nations, and when he did, to honor and remember him. Pachakuteq took this to heart, elevating Inti throughout the empire as the supreme Inca god and constructing grand tributes in his honor, including Qorikancha in Cusco and other opulent temples in important cities.

Pachakuteq quickly defined himself as an Inka of great ambition. During his ~30 years as Inka, he reorganized the government structure and set out to expand the small Inca kingdom into an empire. He led with diplomacy, giving neighboring tribes the opportunity to surrender peacefully to avoid bloodshed. Those who refused were quickly overpowered by the Incas’ powerful military. To integrate the new tribes, their leaders were killed, and royal children were sent to Cusco to be indoctrinated. Sons later returned to their native lands to rule under the Inka, and daughters were married off to other leaders within the empire to build unity. Pachakuteq started an age of expansion that continued until the Spanish invasion.

In addition to growing the empire through his conquests, Pachakuteq undertook grand construction projects that showcased the Incas’ superior engineering and craftsmanship abilities. He was very involved in the design decisions and was likely shown clay models of proposed projects, approving each of them himself. The famous “imperial style” stonework, where stones are perfectly cut and fit together without mortar, was his preferred style as it highlighted the skill of the craftsmen and demonstrated the power and dominance of the empire. Besides completely overhauling Cusco, he also built several royal estates, assumed to be monuments to his victories.

We’ve already visited one of these estates, Ollantaytambo. Another is at Pisac, and finally, the most impressive, Machu Picchu. The estates celebrated Pachakuteq’s successes and were luxurious retreats for him and his family. Machu Picchu was the last one built and is thought to commemorate his conquest of the Vilcabamba Valley.

So, how did this city in the clouds come into being? The first step was to choose a site, and while the reasons for the specific site selection aren’t known for certain, there are some clear advantages to this one. A major benefit is its access to clean water via a spring located on the mountain of Machu Picchu. It also has views of the Incas’ most sacred mountain peaks, and its challenging location offered the opportunity to show off what the Inca builders were capable of.

While the site looks conveniently flat today, that’s not how it started out. The “city” is located between two mountain peaks, or “picchus” – Machu Picchu (old peak) and Huayna Picchu (young peak) (Huayna Picchu is the one that you see in the background of the classic Machu Picchu photos). Before it was even possible to build the structures, the dip between the two peaks had to be filled in and leveled off to create a flat area for building. To stabilize the ground and decrease the risk of collapse from the weight of the new city, terraces were constructed, deep foundation and retaining walls installed, and drainage systems designed. Estimates are that 60% of the construction at Machu Picchu is actually underground.

The 700+ terraces at Machu Picchu create about 12-14 acres of farmable land. This likely wasn’t sufficient to support the estimated 750-1000 people who were on site when the Inka was there, and additional food was brought in to supplement the harvest. Even so, for farming on a mountaintop, it sounds pretty good to me! When the Inka wasn’t in town, a skeleton staff was left to maintain it. The remains of over 170 people were found at the site, and bone analyses indicate that people came from all over the empire to serve there.

Back to the terraces… I’ve previously talked about the integrated irrigation systems that the Incas included in some of their terraces. At Machu Picchu, it was determined that irrigation was unnecessary due to the wet and humid climate. Instead, extra attention had to be paid to water management. Analysis of the terraces revealed that they were constructed in layers to facilitate drainage with large stones at the bottom, a mix of packed sand and gravel in the middle, and topsoil on the surface, probably carried up from the more fertile valley to better support crops.

With the foundations completed, work could finally begin on the buildings. I’ll talk more about the specifics next time, but assuming the site was, in fact, a royal estate, it included royal residences, housing for nobles, ceremonial and religious spaces, and support spaces like servant housing and storage. There are about 200 buildings in total.

Beyond the construction work on the mountain, there was also a massive road-building project to link this new estate with other significant parts of the Empire. The road from Cusco winds 27 miles through the mountains, passing Ollantaytambo and continuing its way up, down, and around the peaks until reaching Machu Picchu. A much easier option would have been to construct a road along the Urubamba River, but that’s no fun! It’s possible that Machu Picchu was also a pilgrimage site for the worship of Inti, and the long, difficult journey to get there was meant to test and prepare the pilgrims.

One of the reasons Machu Picchu is so archaeologically significant is because the Spanish never visited. That means that religious structures were never defaced in their campaign to Christianize the pagan civilizations, giving valuable insight to researchers. Why did the Spanish never make it there? The site was completed in the 1450s or 60s and was abandoned less than 100 years later. What happened? No one is really sure. Perhaps the site was deserted after Pachakuteq’s death. Perhaps there was an epidemic or an attack by the jungle tribes that wiped it out. Perhaps it was simply forgotten. Likely, most people in the empire had no idea it even existed.

Machu Picchu sat abandoned for hundreds of years and was only brought to the world’s attention when it was “rediscovered” in 1911 by an American historian, Hiram Bingham, as he was searching for the “lost city” of the Incas, Vilcabamba (where Manco Inka set up his remnant Neo-Inca state). Bingham gets the credit for finding it, but in reality, it was no secret. He traveled along the Urubamba River, asking if anyone knew of ruins in the area, and was shown to Machu Picchu by a farmer. There were multiple local families living there and farming on the old terraces. Also, as the site was excavated, the absence of precious artifacts suggested that treasure hunters had already plundered it.

Bingham and his crew excavated the site for five years and sent artifacts back to Yale, where he worked, for further research. Peru is still trying to get these items returned today. In 1981, Peru created a national sanctuary protecting Machu Picchu and its surroundings. In 1983, it was declared a UNESCO World Heritage Site as “a masterpiece of art, urbanism, architecture and engineering” and “a unique testimony of the Inca Civilization”.

Next time, we’ll take a closer look at the details of the site!