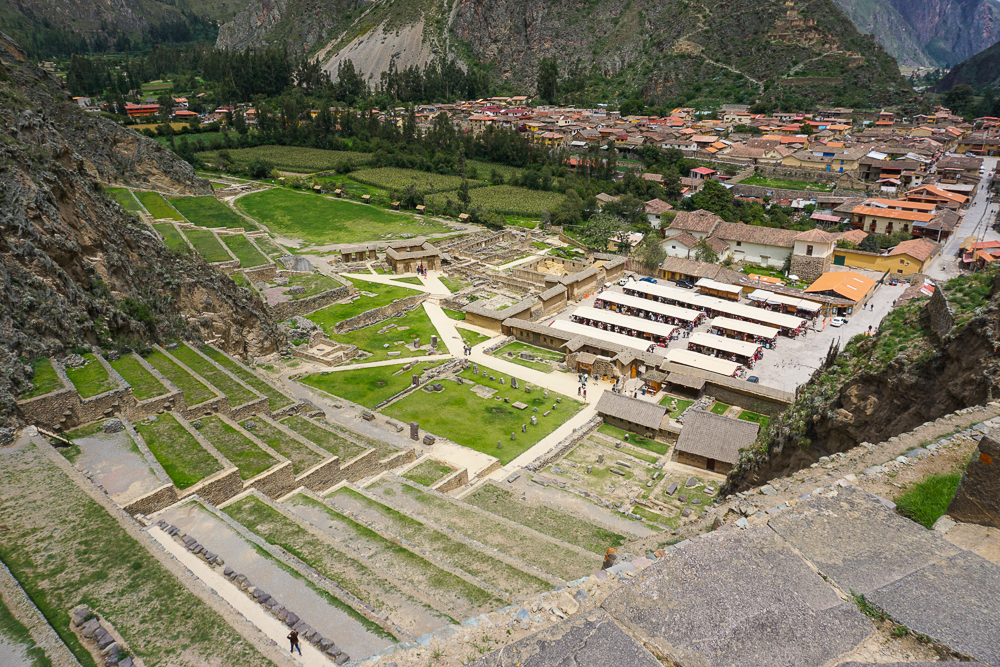 When we left off last time, our good friend Amerigo had just dropped us off in the Ollantaytambo Plaza de Armas after an eventful morning of driving all over the Sacred Valley. We had a few hours until our train was leaving for Aguas Calientes (the gateway town to Machu Picchu), so we stopped for a quick lunch before heading to the Ollantaytambo ruins.

Ollantaytambo was a royal estate, including a town for Incan nobles and religious areas. Its name comes from a combination of “Ollantay”, a character in a classical Quechua play, and “tambo” which, as we learned at Tambomachay, means a resting place for travelers, offering lodging and food. It was a fortified town, surrounded by protective walls and watchtowers. The streets are designed in a grid, and the Incas engineered a system to channel clean water through the streets to be used by the inhabitants. The modern town is built on the same foundations, and sometimes even within the same buildings, as the Inca town and has some of the oldest continuously inhabited houses in South America.

Agricultural terraces extend both down from the town to the Urubamba River and up the nearby mountains. The geography, especially around the terraces to the river, creates microclimates on the different terrace levels. These terraces have average temperatures a few degrees warmer than those at the town level, and this allowed crops to be grown that normally wouldn’t survive at such an altitude.

One set of terraces dominates the town, and these lead up to “Temple Hill” where the main temples were located. They look very steep and intimidating. Mom took one look at the seemingly endless stairs to the top and told me to go ahead with Benjamin and Jocelyn so that she and Dad could take their time. It wasn’t just an illusion… the terraces in Ollantaytambo actually are steeper than others in the Empire. They were built to a higher standard than most, and this follows the same pattern that we’ve talked about before where more important buildings/sites can be identified by the construction quality. These terraces match what was built at other royal estates, with higher walls between levels and the use of cut, rather than rough, stones.

Temple Hill is topped by the Sun Temple because, as you may remember from our discussion of Qorikancha, the sun deity was the major Incan god. As it appears now, the temple seems to be incomplete, though whether it was truly unfinished or was destroyed by the Spanish is another question.

The major feature of the Sun Temple is a towering wall formed by six pink granite boulders. These were brought from a quarry about 5km away, probably via log rollers, and then were somehow hauled up the mountain to their final resting place. The route from the quarry also includes a river crossing, and it is believed that the Incas diverted the river in order to move the stones across the riverbed. Insanity. Between the quarry and Temple Hill, other giant pieces of pink granite lie abandoned. These are called “tired stones” which I think is absolutely hilarious because whether it’s true or not, it makes me laugh to imagine a bunch of people struggling to move a giant stone, then looking at each other like, “This is exhausting. Why are we doing this??” and just leaving it there.

Above the terraces, there are ruins of structures that were likely military barracks, storage rooms, and such.

Away from the groups of buildings, there are others in more isolated positions on the mountainside. These were most likely storehouses for the food grown on the terraces. Their high-altitude locations, with lower temperatures and more wind, helped to guard against decay. They have openings for ventilation and for the entrance and exit of grain. We were confused by the first storehouse we came across because it seemed like it used to be a two-story building. It’s hard to explain, so check out the picture below. Jocelyn and I are in doorways that enter from higher up on the mountain. Benjamin is down the mountain. Why are there doors leading to a 12-foot drop? There’s no indication that there used to be a floor that no longer exists. Well, the storehouse explanation solves that mystery. The “second-floor” openings were for pouring the grain into the storehouse, and the “first-floor” openings were for removing it. Pretty smart, right?

At ground level, there’s a series of ceremonial fountains that were used to worship the water god. They’re still flowing today, fed from the nearby Patakancha River, the same one that brought water to the town’s streets. The river is also used for irrigation in some of the terraces, and there are terraces that still function and are in use today! Kind of amazing for hundreds of years later. Unfortunately, as many of the Incas’ aqueduct systems fell into disrepair under the Spanish, this isn’t the case for most across the former Empire. I guess the Spanish were more focused on extracting gold and silver rather than on agricultural development.

The ruins in town are often called “Ollantaytambo Fortress”, despite not actually being designed to serve a protective purpose. This is similar to the confusion with Saqsayhuaman and may stem from the fact that both were ultimately used for a defensive advantage in battles against the Spanish invaders. Ollantaytambo was the site of a particularly exciting battle as it was one of the few that ended in an Inca victory. Led by Manco Inka, the Incan forces made a stand there in 1537 after fortifying the eastern defenses, in the direction of Cusco (which the Spanish had already conquered). Besides using the steep farming terraces to their advantage, the Incas redirected the Urubamba River to flood the plain and slow down the Spanish cavalry.

Despite this victory, Manco Inka then fled deep into the jungle, reasoning that Ollantaytambo was too close to Cusco to be held for long. There, he established a small Neo-Inca state that managed to survive until 1572.

Personally, I think Ollantaytambo is underrated. Everyone just uses it as a pass-through town, and while I can’t really say much because that’s what we did too, I would love to go back and spend more time there. If you like to hike, there are some super cool hikes in the area… like you can hike to the quarry where they got the stones for Temple Hill, or there’s an abandoned Inca town called Pumamarka nearby. Well, I guess this just means I’ll have to go back to Peru again. Darn!

When we finished exploring the site to everyone’s satisfaction, we had more than enough time to get to the train station. Talk about a well-planned day! (I’m patting myself on the back.) The train ride to Machu Picchu is one of my favorite things. You’re riding beside the Urubamba River for most of the way, and the mountain views are spectacular. I took some pictures, but they’re terrible because of the moving train and the dirty train windows (and also because I have a gift for taking pictures a split second too late… so instead of a view, I get a giant tree trunk in the way)… but just try to imagine.

In Aguas Calientes, we bought our bus tickets for the next morning (from the town center up to the archaeological site), checked into our hotel, ate dinner, and went to bed. We had to rest up for our 5AM departure time the next day for our visit to Machu Picchu!