I was feeling ambitious on Istanbul Day 5. I made this long list of things that I wanted to visit, and I didn’t think it through at all. I mean, at the time, I thought I was thinking it through, but that was using the incredibly limited information that I had in my brain.

The major planned destination was Topkapi Palace, a former palace of the Ottoman sultans. The weather wasn’t very good, but I heard the word “palace” and very mistakenly thought that corresponded to “good rainy-day activity”. Anyone who has done one millisecond of research about Topkapi would tell you that’s definitely not true because the palace prominently features four very large courtyards. Uncovered courtyards. Aka outside. Aka when it rains, it will rain on you. Brilliant, Lara.

Even after realizing that maybe I hadn’t planned things out perfectly, I pressed on because I was just happy that I managed to make a plan at all. You don’t go messing with the plan when you have nothing to replace it with. I mean, now I would happily offer multiple ways that I could have reworked my schedule to better accommodate the weather, but hindsight’s 20/20 and as we’ve seen, my foresight was essentially blind. Literally the only commendable planning I did that day was deciding to take my raincoat and the plastic bag I modified to cover my backpack when it’s raining. Better than nothing I suppose.

The hill where Topkapi is located was once the home to the Greek acropolis during the Byzantine years with huge temples dedicated to the Greek gods. During the years of Roman rule, these temples were repurposed but eventually started to fall into ruin. After the Ottoman conquest of the city, a palace was constructed in place of the temples from 1460-1478AD.

In the years that followed, the palace was gradually expanded and was home to the Ottoman sultans and their court until the 1850s. At that point, it was no longer able to adequately support the ceremonial needs of the government, and Dolmabahce Palace was built. Despite the end of use as a royal residence, it continued to operate as the imperial treasury, library, and mint and host state ceremonies until it was converted into a museum in 1924 after the fall of the Ottoman Empire.

The palace has a prime location on the tip of the Istanbul Peninsula and covers somewhere between 590,000 and 700,000 square meters (145-175 acres). The general layout of the palace is four courtyards surrounded by various rooms and structures, and as you move from one courtyard to the next, the spaces get increasingly more private.

The first courtyard, or the Parade Court, is massive. I came in the side entrance which doesn’t have an epic gate or anything, so I didn’t initially realize that I was inside the palace compound. It’s mostly a huge open space with a few randomly scattered buildings including a church, Hagia Irene, the very first church built in Constantinople. It was the head of the Byzantine Orthodox Church until the completion of the Hagia Sophia. Hagia Irene is one of the only churches that wasn’t converted to a mosque during Ottoman times. Instead, it was used as the armory for the palace. (Fair warning – get ready for a TON of pictures in this post.) 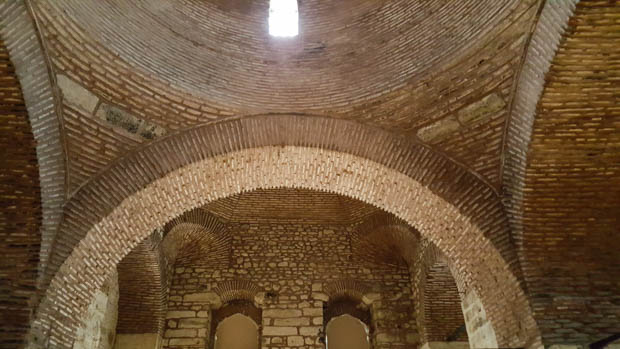 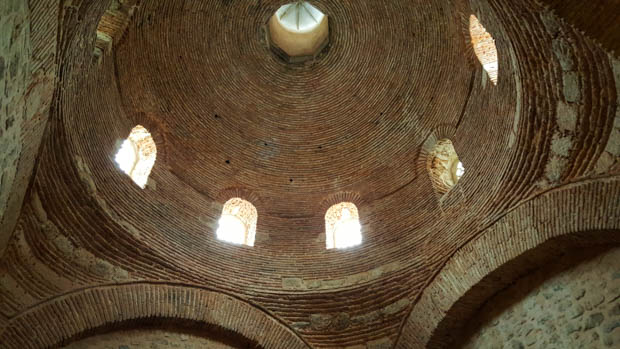 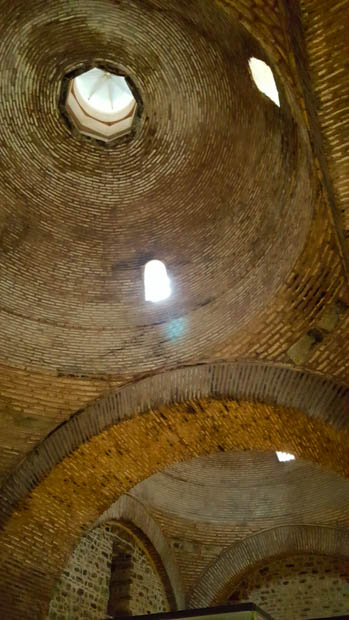 They had some interesting records that showed menus from different years, supply orders, etc. They really put things into perspective. Ready for this? Here’s a list of the palace’s meat consumption in 1184:

They also had a crazy amount of Chinese porcelain. I laughed at one caption that said during the month of Ramadan, the sultans ate from porcelain dishes instead of gold and silver. WOW. Really depriving themselves of the finer things in life.

My favorite list, though, was a list of spoons purchased in 1839. Just spoons. They were made from all sorts of different materials: tortoiseshell, walrus ivory, walnut, ebony, horn, pistachio wood, and more. The list is not short, and I’m mostly just confused because how many spoons do you really need? 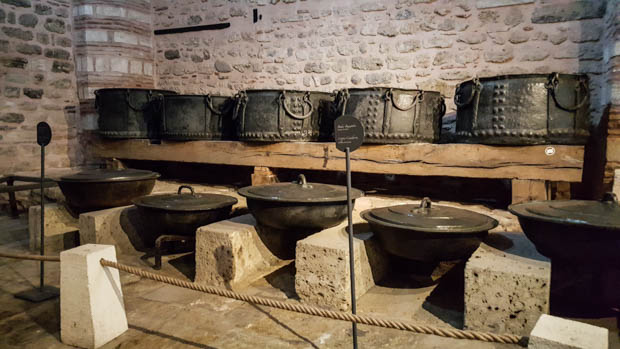 The next exhibit was weaponry which I’m not that interested in, but a lot of it was just ceremonial and as a result VERY decorative. 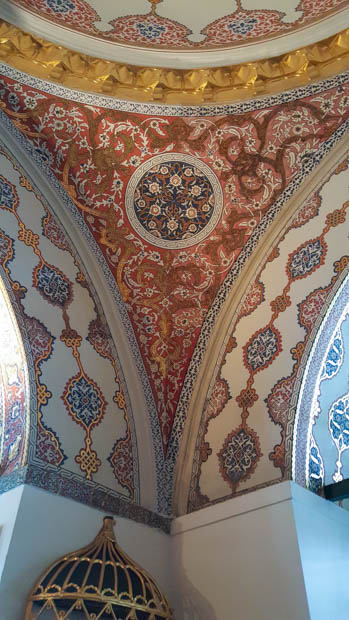 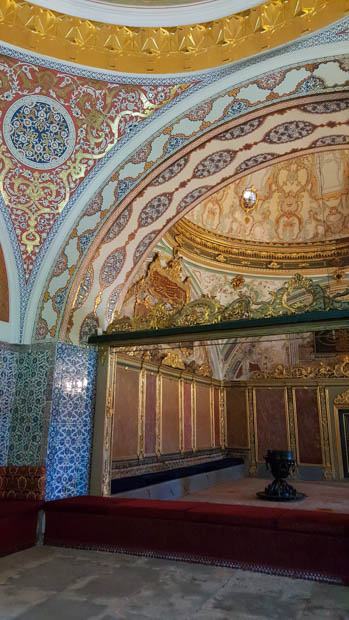 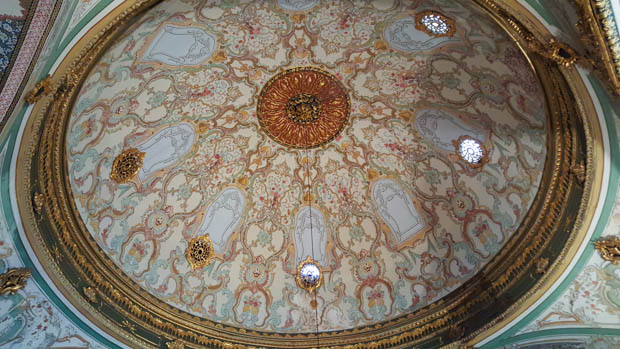 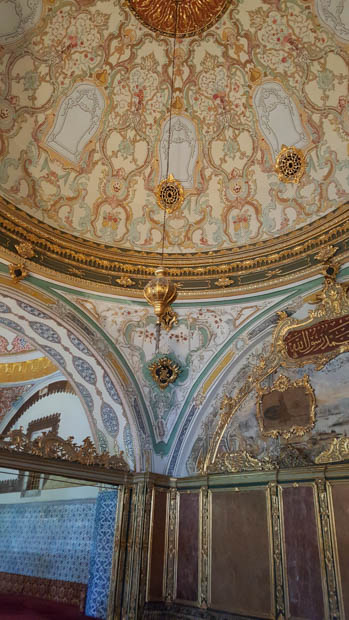 The third courtyard was much more private and was surrounded by the living quarters of the page boys who served the sultan.

This courtyard is also the location of an exhibit showing various religious artifacts including some of the most random things in the universe. These include the saucepan of Abraham, Joseph’s turban (Old Testament Joseph who was sold into slavery by his brothers and ended up working for the Pharaoh), David’s sword, Moses’s staff, John the Baptist’s arm (ew), a footprint of Muhammad and a piece of one of his teeth. You get the idea. 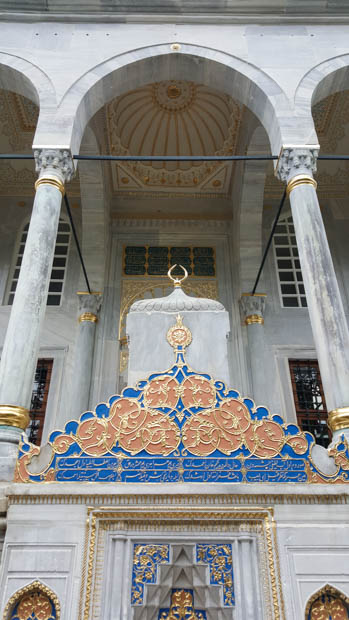 The fourth courtyard had the best tiles in the whole palace, and it was filled with various pavilions and commemorative buildings. 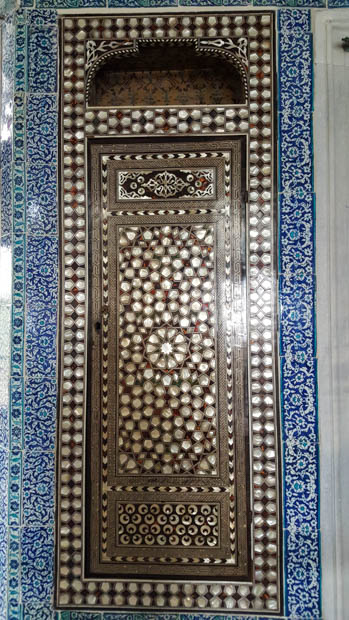 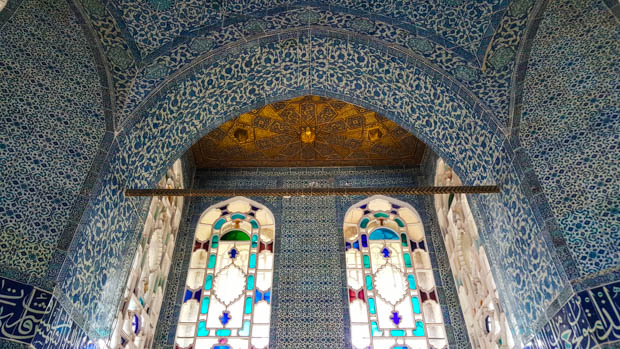 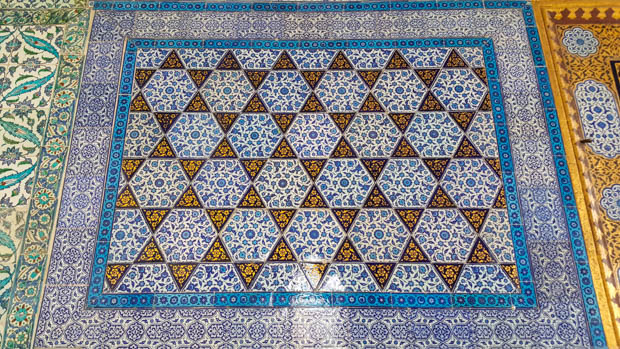 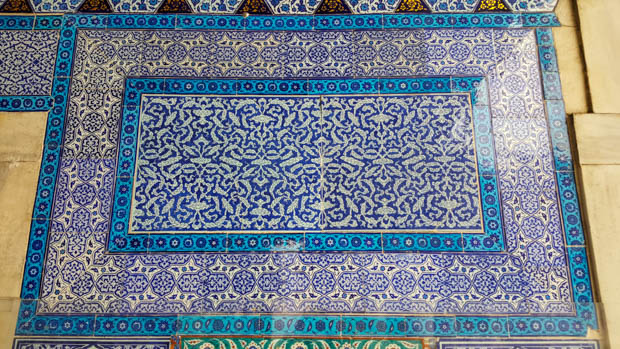 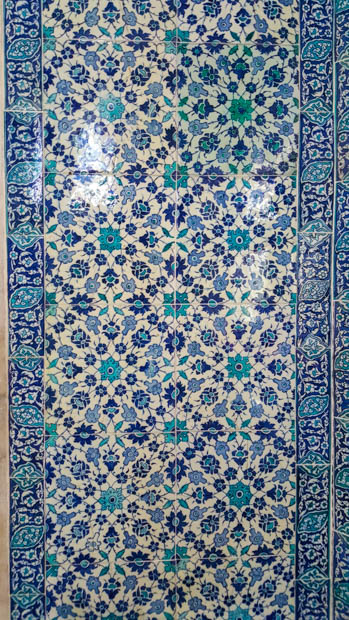 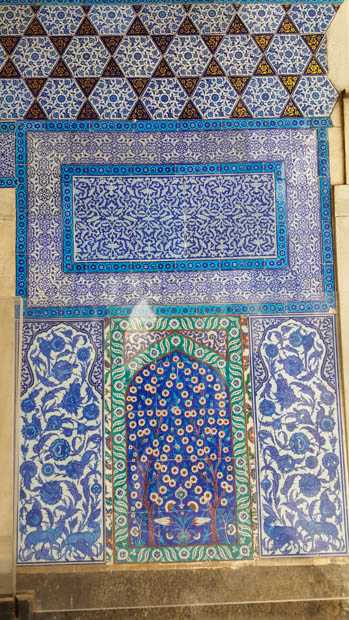 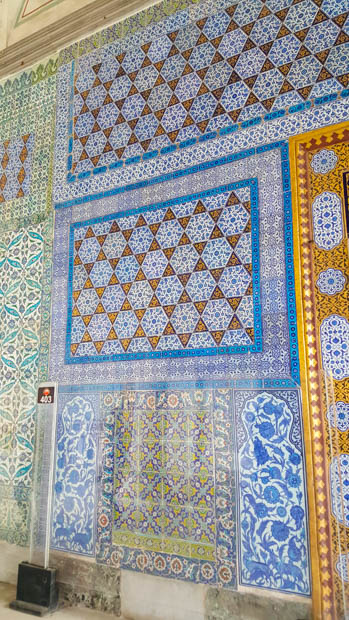 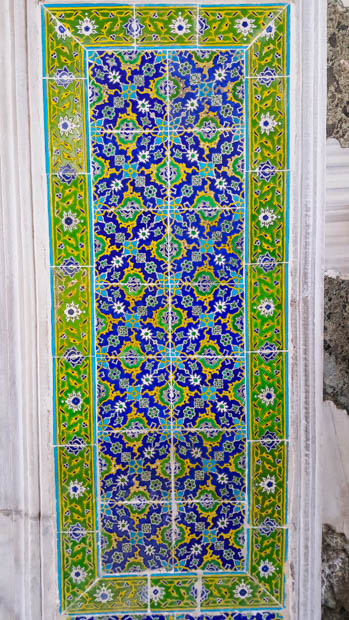 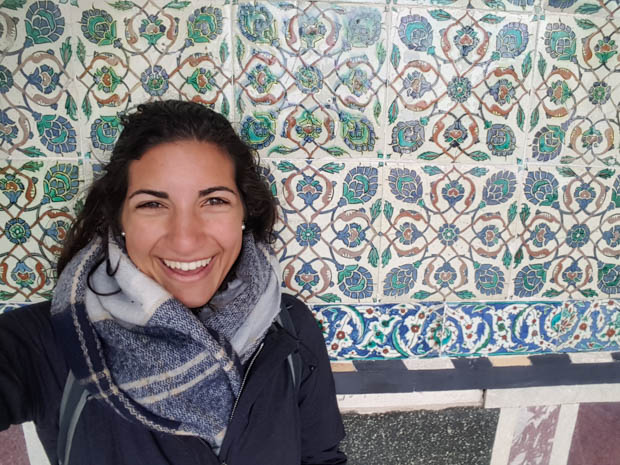 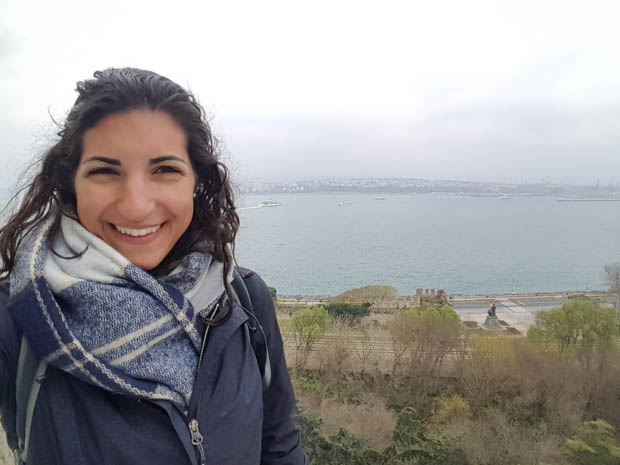 The Harem is the most private part of the palace, and it’s where the sultans and their families lived. Residents included the sultan, his mom (the Queen Mother), his wives (he could have up to four), concubines (female slaves), favorites (the Sultan’s girlfriends), eunuch guards, and the children.

The Queen Mother was basically in charge of the sultan’s social life. She decided who socialized with him and which women he could have relations with. The eunuchs were slaves brought from Africa to help guard the harem, and their genitals were removed.

The rooms in the harem were generally spectacular. I think my jaw dropped every single time I walked into a new room. You’d think I would have started to expect it, but I never did. I would walk in, stare in amazement at the rooms for way longer than anyone else (most people just walked in, click clicked a couple pictures, and walked out again), take a few pictures, and then walk into the next room and repeat. I think it’s a shame when people only see things from behind their cameras. Take a second to enjoy things with your eyes, people! Sorry, mini rant…

Here’s a tour in photos and captions: 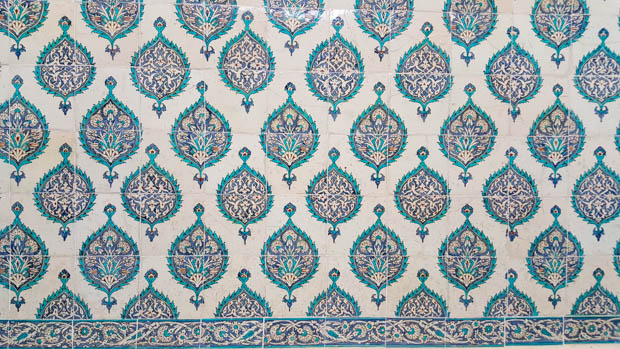 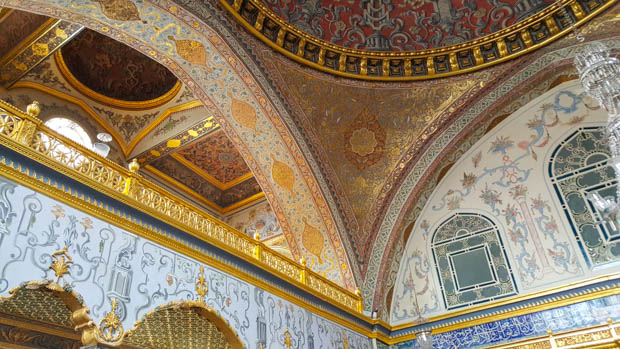 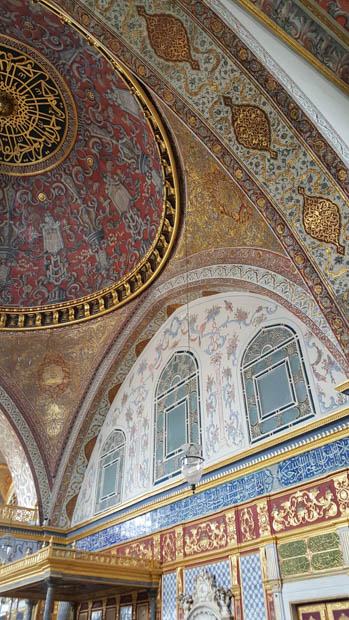 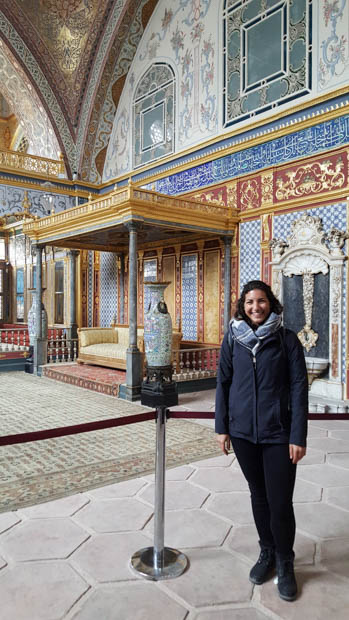 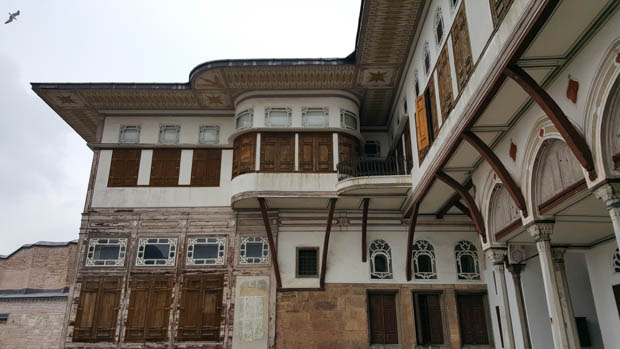 My day at the palace was long and VERY cold, but also awesome. I mean, it definitely could have been more awesome if I had checked the weather, but we won’t think about that. I had plans to go to another museum after I finished at the palace, but I ended up spending more than 5 hours there which meant that everything was closed by the time I made it out. Oops. I think it’s better to do a few things thoroughly, though, rather than a bunch of things halfway.