One of the big tourist circuits in Iceland is called the “Golden Circle”. It primarily includes three sights to the east of Reykjavik, and it’s doable in a day trip which makes it popular for bus tours and people on long layovers. Now, don’t ask me why it’s called the Golden Circle because I certainly can’t explain that to you. I would assume that the “golden” part has something to do with the fact that these are major sightseeing destinations and one of them is called “Golden Falls”. Okay, I can get behind that. It’s really the “circle” part that I have an issue with. Please refer to the map below and tell me what shape you would use to describe the route.

If you said “circle”, get out. I know it’s been a long time since I took geometry, but that is a LINE(ish). Some versions of the route include some other sights a little further south, but when the essentials are all in a line and the optional extras are what makes it a circle(ish), I think calling it a circle is a stretch. So, the conclusion of that completely necessary rant is that I will be unapologetically referring to our route as the Golden Line.

Mike and I planned to hit the Golden Line sights on our second day. I want to take this opportunity to give a HUGE shout out to my Aunt Judy because she was the MVP of our trip. The amount of planning that we put into this trip was far from ideal… it was close to zero. Anytime I tried to research, I was completely overwhelmed by information and quickly put off further efforts until “later” (a later that never came). Aunt Judy sent us her research notes from their trip to Iceland a few years ago, and those notes became our guidebook. We didn’t follow them completely, but at least we had a starting point to make sure we didn’t miss anything major.

Our day started later than planned. Mike wanted to leave at 8:30, and considering what time we went to bed the night before (we ate dinner at 10PM, so you can extrapolate from there), I had no confidence in that actually happening. Sure enough, we ended up leaving at closer to 9:30. The first stop on the tour was Þingvellir (Thingvellir) National Park.

Thingvellir, as I explained in the Iceland History post, is considered the founding location of Iceland. This is where the first parliament (the Althing) met back in the days of the chieftains, making laws and settling disputes. So historically, it’s a very important place for the Icelandic nation. We, of course, knew none of this when we arrived and had no idea what we were supposed to do there, so we parked the car (and paid for parking, so we were hoping it was worth it), pep-talked ourselves out of the car (it sounded like we were in the middle of a world-ending rainstorm), realized the weather wasn’t nearly as bad as it sounded from in the car, and went to do some exploring.

There was a nice view of the valley near our parking lot, and after reading the signs, we realized that another thing on Aunt Judy’s list, Öxarárfoss (waterfall… “foss” is the ending that they put on the name of a waterfall in Icelandic), was inside the park. Also, it’s another place situated between the two tectonic plates. We walked beneath the cliffs at the edge of the North American plate on our way to the waterfall. I guess that kind of means that we were on no-man’s land, floating between two continents. Weird. There are some places in the park where you can scuba dive between the plates. That would be crazy! 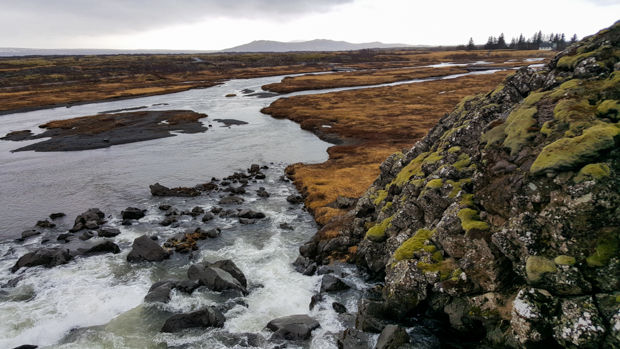 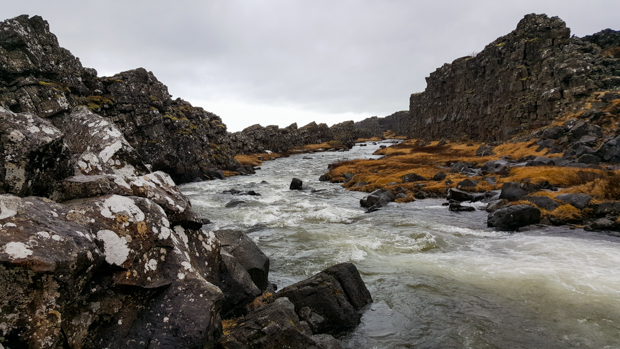 We eventually made it to Öxarárfoss, our first of many waterfalls. Unlike most of the others we saw, Öxarárfoss is man-made! The Öxará River was re-routed hundreds of years ago to bring water closer to the meeting point of the Althing, and it flows over the edge of the North American plate. It’s basically a waterfall off the end of the earth! I thought it was pretty, and Mike liked it because he likes waterfalls that “have some substance”. None of those little trickle waterfalls for Mike!

On our way out of Thingvellir, we drove by the largest natural lake in Iceland, Þingvallavatn (Thingvallavatn. “vatn” is the usual ending on a name of a lake). It’s about 32mi2 (84km2) in area and is known for its crystal-clear water and monstrous fish. I don’t know much about fishing, but they say that it’s not uncommon to find trout over 20lbs (9kg)! The lake is in the valley between the two tectonic plates, and it sounds like a good place to explore if you want to feel like you’re swimming on another planet and enjoy being cold.

If you prefer warm/scalding water, then you might be better suited to our next stop, Geysir. I bet you’ll never guess what that is. Yup, it’s a geyser! It might seem like the people who named Geysir aren’t very creative, but it’s actually the other way around. The English word “geyser” comes from its name and the Icelandic verb meaning “to gush”. Geysir is just one geyser in a much larger geothermal area, Haukadalur, but it is the oldest and most powerful, capable of sending 480oF (250oC) water over 230ft (70m) into the air. It is currently inactive, last erupting from 2000-2003 after it was temporarily reactivated by an earthquake. The big crowd-pleaser now is Strokkur, erupting every 8-10 minutes and shooting water about 100ft (30m) into the air.

Before we checked out Strokkur, we admired the sleeping beast that is Geysir and a few other pools in the area. The water was beautiful. It’s so clear and so blue… and then you get a whiff of it, and the sulfur smell is overwhelmingly gross. But I was cold and in a constant internal conflict of whether I should stand in the steam to feel warm or if I should stay away from it because it reeked.

We joined the crowds to watch Strokkur erupt a few times. The eruption is super cool, and while that’s not happening, it’s entertaining to just watch the people… everyone’s standing around staring at this steaming, bubbling pool, and anytime there’s the slightest change in movement, you can hear people bracing for the eruption. Then, when it’s finally time, it looks like a massive water orb is coming out of the pool, water shoots into the air, and you hear it raining down. When you really think about it, it’s baffling. No wonder people used to believe in all sorts of monsters and stuff because if you told me there was a whale-dragon hybrid living in the earth and superheating/spitting out water at that spot, I’d probably say that sounds like a reasonable explanation.

Mike had fun touching all of the water… well, not all of it because some of it probably would have burned his hand off… but a lot of the water in various places and guessing whether it was going to be hot or cold. It was usually disappointingly cold, but we did touch the water runoff from right after the geyser erupted, and that was definitely hot. 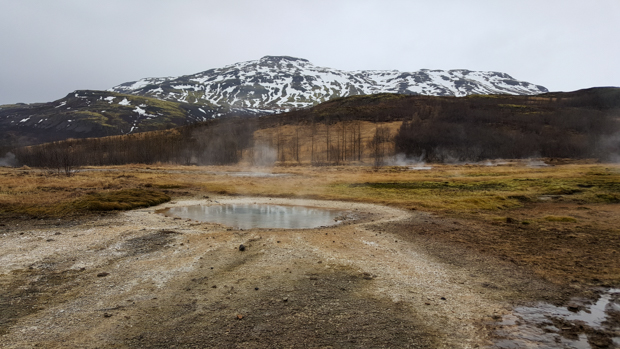 The last big stop of the day was Gullfoss, another waterfall, as you can see by the name. Again, we knew nothing about it until we got there, but it’s “the Niagara Falls of Iceland”. There are signs determined to convince you that it’s even better than Niagara, but I’m going to say that they are both cool and there’s no need to choose a winner. Gullfoss is interesting because it has two tiers of waterfalls. The volume of water flowing is incredible, and it’s the same, beautiful, clear blue as the lakes. So darn pretty!

There were actually plans to build Iceland’s first hydroelectric power plant at Gullfoss, but the owner’s daughter, Sigríður, loved the waterfall and was determined to preserve it. She frequently walked to Reykjavic to gather support (75 miles or 120km) for her cause, and when it seemed that all hope was lost, she threatened to throw herself into the falls. Thanks to her efforts, Gullfoss was saved and eventually declared a national park, protected against any future development.

One more Gullfoss story – there’s a sign that tells a 17th-century love story about a boy and girl who kept watch over sheep on opposite sides of the river above the falls. They also “kept a keen eye on each other”, and the girl asked the boy to cross over to her. Despite the strong currents, the boy made it across. The sign concludes the story by saying that “little is known about how the girl responded, except that they married and had many well-respected descendants”. Well, I don’t know about you, but I’m just happy that none of their descendants turned out to be disreputable. Phew.

The only stop left was our campsite for the night. It was still kind of early, but that was good because Mike got a new tent before the trip, and it was our first time setting it up outside (we did a test run in Tony and Alex’s apartment the night before). We spent our first hour at the campsite sitting in the car because we were cold and it was raining and we didn’t want to get out. Productive. Finally, we convinced ourselves that it would be best to get the tent up before dark. Of course, it was crazy windy and raining, and our attempts to be strategic and use the rain fly to keep the tent from getting wet while we were putting it up completely failed. Live and learn! We successfully assembled it (a task that included driving about 18 stakes into the ground) and then fled to the safety of the car again until Tony showed up. He was joining us for the next phase of the adventure, and we wanted to be able to leave straight from the campsite in the morning.

Mike and I grudgingly got out of the car again, and we piled into the tent and played card games until we were ready to fall asleep. Oh yeah, and it was dry inside, so despite our struggles, tent set-up attempt #1 was a success!