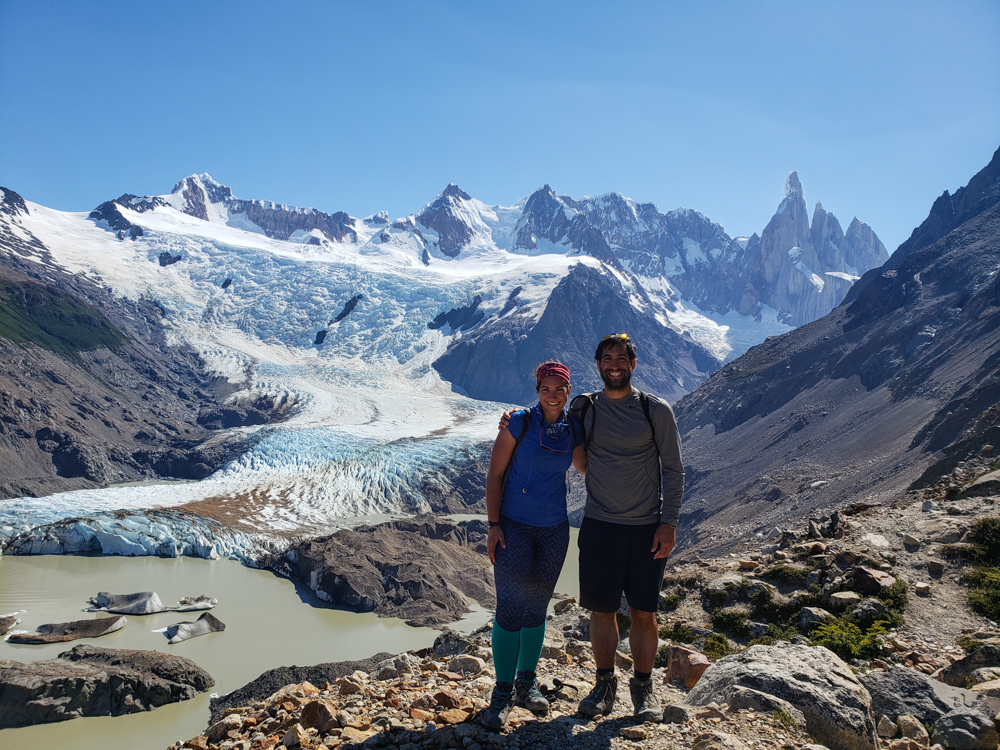 Our stay in El Calafate was especially short the second time around. We arrived at about 10:30PM, went to sleep at 3:30AM because we apparently love to self-sabotage, and caught a bus to El Chaltén at 8AM. The morning started off extra rough. Any morning after 4 hours of sleep is not going to be pleasant, but we also got a surprise at 7:30 when the lady from the hostel told us that she was confused when she said that the bus would come to pick us up, and we actually had to be at the bus station at 8. EEEEEE!

Thankfully, we were going back to the same hostel in a few days, and they let us leave some of the things we didn’t need (like our tent) which meant packing was infinitely easier. We ran around like maniacs trying to pull ourselves together and were out around 7:45… and we then powerwalked to the bus station because I do NOT like to cut those things close.

The bus ride was uneventful: the scenery was beautiful, Mike slept the whole time, some obnoxious person played music without using headphones. The usual. When we arrived in El Chaltén, the bus went straight to the ranger station so that we could get an introduction to the park and the hikes.

El Chaltén is a village in the northern part of Parque Nacional Los Glaciares, the same park that we visited on our first day when we trekked on Perito Moreno Glacier. The town is inside the park. This is super weird to me because we don’t have people living in national parks in the States. I found myself frequently confused by the “national park” concept during our trip. Like there are portions of some parks that are privately owned. In Torres del Paine in Chile, some portions of the actual W Trek are on private land, some of the campsites are privately owned, etc. You literally can’t do the trek without crossing between private and national land. Very confusing while you’re hiking and get to a sign that says, “Welcome to Torres del Paine National Park,” and you didn’t think you’d ever left.

I did some research before we went and thought it would be a good idea for us to take it easy on our first day considering we were coming off of four long days of trekking. There are some short hikes around town, so I had those on the schedule for the first day and had the two major long hikes on the following two.

At the ranger station, the guy who did our orientation said that the weather was really nice, so it would be a good idea to go on a hike in the afternoon if possible because no one knows what weather tomorrow will bring. I said, “We’re doing that already!” Mike said, “We should go on a longer hike just in case.” Ugh. So much for a rest day. His plan was to do the “short” 6-hour hike on the first day, the most popular 8-hour hike on the second day, and this one that’s literally 4 hours up and then 4 hours down on the way back on the last day. He’s a loon. He told me that I could skip the last day if I wanted to rest, but who rests on the LAST day of a hiking trip? That defeats the whole purpose of a rest day!

So, Mike decided that we should do the Laguna Torre hike because the trailhead was literally across the street from our hostel, and it was ONLY 6 hours, unlike the other two hikes he wanted to do. By the time we checked in and got settled and ready to go, it was about 1:15PM aka the hottest part of the day and definitely the ideal time to start a 6-hour hike (sarcasm, in case you didn’t catch that).

The hike itself really wasn’t that bad, but my feet were still killing me, and it was HOT. Even the woman who checked us in at the hostel said that it was abnormally hot, and she was ready for it to cool down again. Yeah, same. The beginning of the hike had some uphill that wasn’t too bad… except for the fact that there was no shade. I learned my lesson after the unfortunate arm-burn incident of the Torres del Paine trek day 3 and covered myself in sunscreen. Mike seems to think he’s superhuman and is fine with a little sunscreen on his face and nothing more. What is it that they say about doctors being the worst patients? I believe it.

After the start, it got much flatter and much shadier for the entire middle stretch of the hike. That was a welcome break! And then, after a tiny uphill, we made it to the lake! Laguna Torre, with its breathtaking waters the color of very milked-down coffee. Yeah, it was kind of gross looking. If that was the main attraction of the hike, I would have said, “NOPE not worth it.” But, you’re really there for the glacier at the far end of the lake.

We did this extension of the hike to a viewpoint closer to the glacier, and as well-marked as the beginning part of the hike was, this part had exactly ZERO trail markers… unless it was actually so unclear that we were not even near the actual trail. I think we were, though, because part of the hike was along a ridge where there weren’t many other options, so I’m thinking it was actually just terribly marked. The extension was completely exposed to the sun, very rocky, and all uphill. And we spent the whole time going, “Hmm, these rocks look like they’re a little more trampled down, maybe the path is over here,” crossing our fingers, and walking that way.

I don’t even know if we made it to the actual viewpoint because we never reached a sign that said we did. We got to a place that looked like it COULD be the end and then Mike decided that if it wasn’t, it was better than the actual thing anyway (based on nothing but his intuition). That was fine with me. I was ready to turn around. We ate a snack in the shade of some rocks before turning around.

On the way back, my body was so over walking. Mike was laughing at me because I spent considerable energy ranting about how they have some nerve putting up signs that tell you what kilometer you’re on. How rude, right? You may be thinking, “Oh, that sounds great! Then you know exactly where you are and how far you have to go.” Yes, but no. Yes, I knew exactly how far we still had to go, but no, it wasn’t great. It ruins any chance you have of deluding yourself into believing that there’s only a little bit left. I spent the rest of the time yelling at him (kindly, of course) to tell entertaining stories to distract me from my misery.

When I’m hiking, I go through these phases. At the beginning, my feet hurt and it’s awful, but soon enough, they go numb, I feel fine, and I’m cruising. Later, my feet inevitably remember how unhappy they are and start screaming at me, and I hobble along in agony. Eventually, I get like a 4th wind and can crank out a few more kilometers until I crash and burn again and hobble the rest of the way home. The good thing about this hike was that the trailhead was maybe 20 steps from our hostel, so I really could just collapse at the finish line.

As grumpy as I was at the end, I was happy that we had just done it and had one less day to worry about getting good weather. We spent the rest of the night hanging out with some people we met at the hostel, draining our fresh blisters (that was only me), and crying over the sad state of our feet (also only me). And eating mass quantities of ravioli, the official hiking food of Mike and Lara. All in all, it was a good (and exhausting) day.