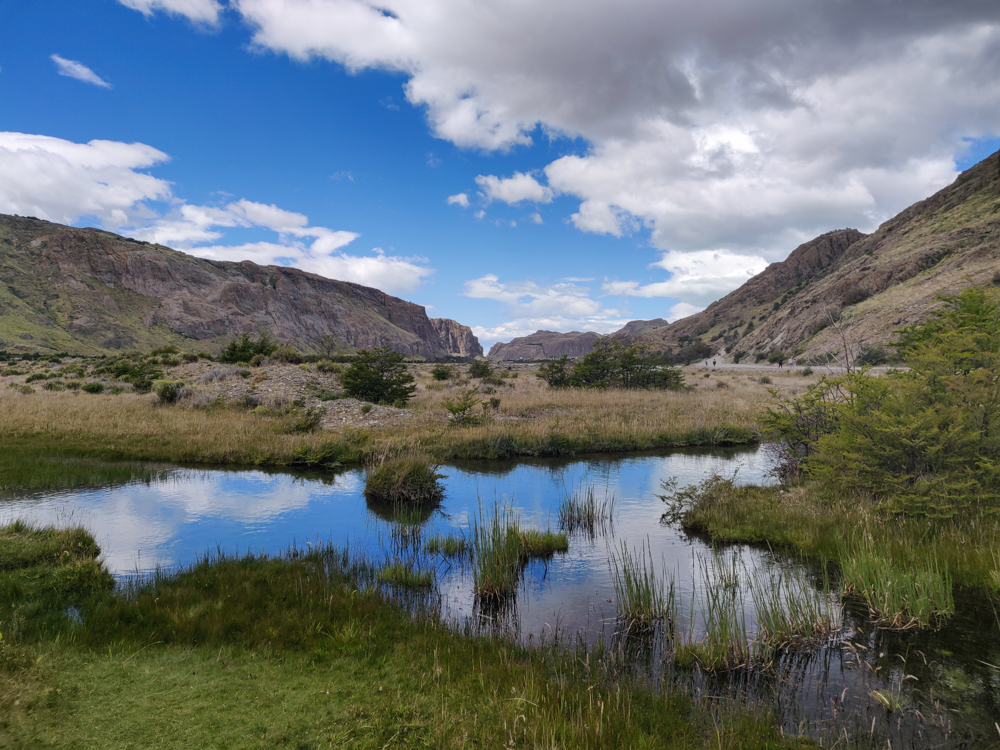 Our final day in El Chaltén was also our final day of hiking… our seventh in a row. The fun wasn’t completely over – we had a flight to Buenos Aires the following day, but the nature portion of the trip was coming to an end. Even though we had a bus to catch, it didn’t leave until 6PM which meant we had nearly the entire day to wander around and get our final taste of the Patagonian wilderness.

Originally, Mike wanted to do this hike that’s 4 hours of constant uphill and then 4 hours down the same path to come back. It’s supposed to give you a really nice view of the valley on a clear day. He said I didn’t have to go with him, and I’m still not sure if that was him trying to be nice or trying to tell me that he didn’t want me slow-poking along… but if it was the latter, too bad because I decided that I was going to do whatever he wanted, even though there was NO part of me that wanted to go on another 8-hour hike.

THANK GOODNESS he changed his mind. He decided the night before that he didn’t want to do it anymore “because it doesn’t sound very fun”. Tell me about it. I was pretty happy.

We decided to have an “easy” day and do three little hikes around town: two to viewpoints and one to a waterfall. This was the itinerary that I planned for us to do on our first day in town as a rest day before Mike overruled me and sent us on the Laguna Torre hike instead because the weather was nice. I gave him a hard time about deleting our rest day, but I have to admit… he was right. I know, am I really admitting that Mike was right about something? Yes, but don’t get used to it. For our entire trip, we got EXTREMELY lucky with the weather. Everyone says that the weather is super variable, and it doesn’t seem like clear days are the norm. We had clear skies and good visibility EVERY day, until this last one when we were doing hikes where that wasn’t as important. It would have been much more of a bummer on the longer hikes we did the two days before. So, good on you, Mike.

For once, we let ourselves sleep in and didn’t set an alarm until 8AM. I know, luxury. Before we could hit the trails, we had to pack our bags and move them out of our room since we were checking out. We were like two sloths getting ready for the day and finally motivated ourselves to leave when it was time for our hostel friends to catch their bus. The bus station was right on our way to the first trailhead, so we walked with them, said our goodbyes, and continued on to the “Los Cóndores” viewpoint. It was just a quick 40-minute walk from town, and you get a nice view of the valley. That’s when we realized how unintentionally well-planned our hiking schedule turned out to be. We could see where Fitz Roy was supposed to be, but it was completely covered in clouds. When we went, it was totally clear! Also, it was so good that we didn’t do that terrible 4-hour uphill hike because it’s only worth it if it’s a clear day, and this was definitely not!

About 15 minutes past that viewpoint is another, Las Aguilas. From there, you can see the valley on the other side of the mountains where there’s a pretty lake. They weren’t the most magnificent hikes, but they were definitely worth the minimal effort it took to get there. Plus, we got to see a few condors along the way! I’m not much of a birder, but even I can appreciate seeing such graceful birds swooping through the air.

These two hikes are on the south end of town. Our last hike was to Chorillo del Salto, a waterfall past the north end. It’s only supposed to be a 40-minute hike, but that’s with the trailhead ALL the way at the end of the town. So, we walked from south to north and then went the additional 3km to get to the waterfall.

The hike was easy because it was almost entirely flat but also hard because I kept thinking it should be over soon, and it kept not being over. I guess I would have liked to have some informative signs telling me what kilometer we were on and how many we had remaining, unlike on the Laguna Torre hike when I cursed the existence of such signage. I’m hard to please.

The waterfall was so pretty! Mike and I both admitted that we hadn’t been expecting much. It was definitely worth the seemingly endless walk to get there. We also showed up at the perfect time. Maybe we were right between tour buses? I don’t know, but it wasn’t terribly crowded when we arrived, and like 15 minutes later, it was completely swarmed with people (you can drive almost all the way to the waterfall, so I’m sure it’s a popular stop for tour buses).

Guess how far we hiked on our “easy” day. 10 miles. Ha! So much for that. I mean, it was definitely much more relaxed as far as intensity goes, but that’s still quite a distance for a day that was supposed to be easy! I was pooped by the time we made it back. I can’t even imagine how terrible I would have felt if we’d done the more intense hike! 8 hours? No, thank you!

We still had some time to kill before our bus departure, so we obviously just sat on our butts at the hostel and watched time pass. I was so happy to have some time to sit down… yes, I know that we had a 2-hour bus ride ahead, but post-hike sprawling isn’t the same as bus sitting.

The bus took us back to El Calafate for one more night before our flight to Buenos Aires. The scenery along the way was awesome! I know I said that about the ride to El Chaltén also, and that makes sense because it’s the same road… but I didn’t think anything looked familiar. Maybe I’m losing my mind. Maybe my memory is failing. Maybe I was sitting on the other side of the bus. Who knows? It was fab, though.

All we had to do back in El Calafate was repack our bags for our flight the next morning. Of course, we took forever to do that and ended up going to bed WAY too late. Like past 1AM late. And we had an airport shuttle coming to get us at 5:30 in the morning. Do you see what I mean about us being self-saboteurs?