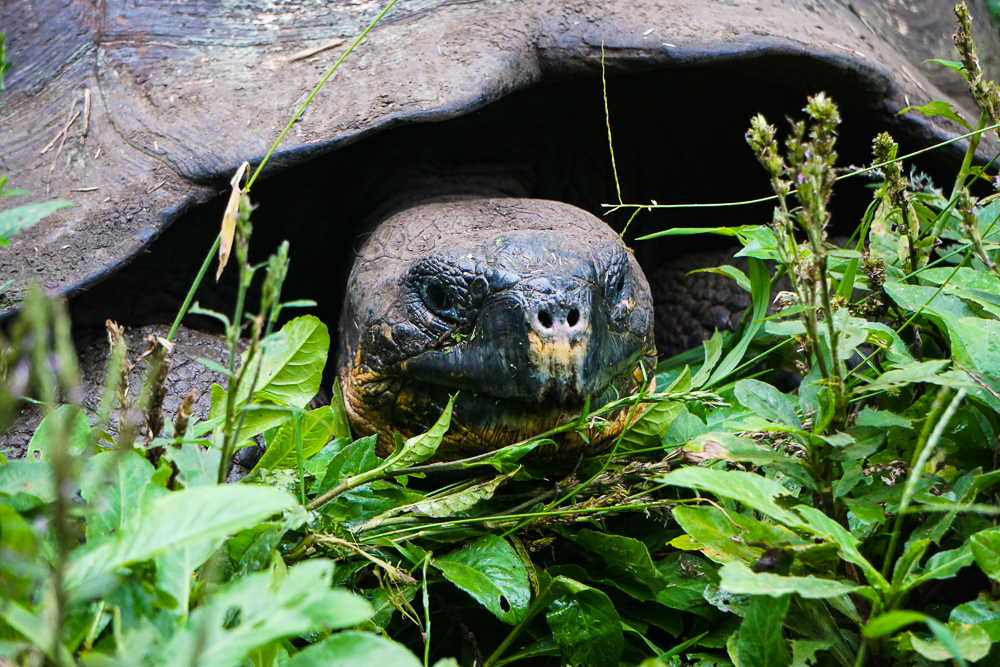 Last time, we did some adventuring around Santa Cruz Island. We visited some spots downtown and checked out Las Grietas (aka the best snorkeling spot), Los Gemelos lava craters, and the lava tubes of El Chato Tortoise Reserve.

There are a few tortoise reserves on Santa Cruz, and I told our taxi driver, Fredy, to take his pick and that we’d be happy as long as there were lava tubes and tortoises. So, we ended up at El Chato. These reserves are different from the conservation centers because they’re privately owned, and the tortoises are technically wild! They’re there because it’s a good habitat, not because they can’t leave. It was weird to see them in the “wild”… we even saw a tortoise crossing the main road! (That sounds like the beginning of a bad joke.) It was a strange sight after only seeing them in captivity to that point. At least with tortoises, unlike with deer, you don’t have to worry about them speedily darting out in front of your car!

Anyway, El Chato used to be a cattle ranch, but around 20 years ago, the owners started working to return the land from farmland to a natural habitat for tortoises, changing the farmland vegetation to native vegetation. This transition naturally brought tortoises back to the land. Now, it’s a lush, green forest and is really beautiful! Besides the vegetation, there are also a bunch of muddy pools that tortoises love. They sometimes spend multiple days hanging out in them, likely to help regulate their body temperatures and maybe to also kill ticks and protect from mosquitos.

I’ve talked a little bit about tortoises in previous posts, but later in our trip, my aunt and I visited the Charles Darwin Research Center, also on Santa Cruz, and learned a lot about the Galapagos tortoises in general. There were originally fifteen distinct Galapagos tortoise species from ten different islands. Now, unfortunately, only eleven species remain, due mostly to human interference and the thousands and thousands of tortoises that were killed for food and oil back in the whaling days.

The Darwin Center is a research hub that monitors the wildlife of the islands and works to minimize damage and neutralize threats. The Center is involved with all sorts of conservation projects, and as part of their tortoise research, they’ve identified genes from two of the extinct species, the Pinta and Floreana, in some living tortoises! The hope is that it may be possible to essentially recreate those species through careful breeding. It sounds insane but also kind of amazing!

The tortoise species fit into two major categories: dome-shell tortoises, and saddleback tortoises. The Santa Cruz tortoises have dome shells. These are typical of tortoises that live in wet zones and where food is plentiful close to the ground. As you’ve seen from the pictures, that’s definitely true of the Santa Cruz highlands! In drier places with less vegetation, the tortoises had to adapt to survive. Saddleback tortoises have shells that allow a wider range of vertical motion which allows them to reach food higher off the ground. It’s so cool to see such a clear example of how different habitats impact how species develop!

I was surprised to learn that most Santa Cruz tortoises are migratory. It seems crazy for that to be the case for such a slow-moving animal! They move anywhere from about 65-2,300 ft (20-700 m) each day, and they travel up to 6mi (10km) from the coastal areas to the highlands during the rainy season. Tracking has shown that while most migrate (and move back and forth between two general areas), some of them seem almost nomadic, wandering here and there without any clear rhyme or reason. One aspect of the tortoise conservation work in Santa Cruz has been educating the locals about these migrations and asking farmers to use raised barbed wire fences so that tortoises can freely move about.

In case you’re wondering how quickly that distance is covered…

This balance between allowing people to live their lives vs. conserving wildlife is complicated. Some people think no humans should live in the Galapagos or even visit. Others think that people should be able to do whatever they want. Neither of these extremes is likely, so the question then becomes, “How can we best serve both interests?” It’s like a case study in compromise, and I think it’s something we can all probably learn from. Don’t get me wrong, the situation is far from resolved. But people are paying attention and trying to figure it out, and I think that’s worth something!

The tortoise reserve was our last stop for the day, so we headed back into town when we were finished. Everyone was pretty exhausted!

The next day, we had time for one more adventure before we had to catch our ferry to Isabela Island. We decided to check out Tortuga Bay, aka the MOST BEAUTIFUL BEACH IN THE WORLD. Yes, another one of those. Like I’ve said, I’m not a great judge of beaches, but this one was definitely memorable.

We walked from our hotel all the way to the beach, first walking about seven blocks to the start of the trail, and then walking another half hour/45 minutes on a shade-less trail to get to the bay.

The scenery along the way isn’t especially exciting, but I was fascinated by these cactuses with trunks that look like cartoon tree trunks. They’re in the opuntia cactus family, or “prickly pear”, and while many varieties exist, the Galapagos opuntias are endemic (they only exist there) and are the only ones that grow like trees! The tallest opuntia are found on Santa Cruz where they can grow up to 40ft (12m) tall! That’s crazy, in case you didn’t know.

The opuntia cacti are well-suited to survival in the Galapagos. They can store large amounts of water, making them resilient in long dry periods. They can grow directly on rocks, an essential ability when the island is nothing more than a giant lava rock. Finally, they’re able to self-pollinate, so they don’t need other cacti nearby to reproduce. It’s not hard to see why that might be useful in a situation where you’re a wayward seed trying to populate a barren island! These cacti are a critical part of the Galapagos ecosystem. Iguanas and tortoises eat their pads, fruit, and seeds. Cactus finches eat their flowers, fruit, and seeds, extract water from their pads, use them for protection when building nests, and distribute their seeds across the islands (thanks to their poop!).

When we finally reached Tortuga Bay, we found ourselves at Playa Brava, the longest and flattest beach I’ve ever seen. With its white sand stretching out as far as the eye can see, it felt almost otherworldly. Most beautiful beach in the world? You can decide.

We walked the endless beach until we reached another, Playa Mansa, where you’re allowed to swim. (You can’t swim at Playa Brava because the tides are too dangerous.) It’s supposed to be a great snorkeling spot because of the nearby mangroves, full of sharks and sea turtles, so my cousin and I decided to check it out. We tried to swim out to deeper water, but the ground sloped so gradually that even after swimming pretty far, it was maybe 3ft (1m) deep. Even so, it was so cloudy that I could barely make out the bottom! There were a lot of dark spots, but most of them seemed like seaweed until… eek! Was that a stingray?? I turned back to check… and it was! A small one, maybe 8 inches (20cm) in diameter. Apparently, I was emotionally unprepared for an actual stingray. My heart skipped, and I let out an underwater scream in surprise! It scared me half to death, and then my scream scared it (hopefully only) half to death! It shifted to the left, then to the right, and then sped away, like when a person gets scared and looks around spastically before sprinting away. Once I calmed down, I felt terrible for scaring it so badly. Sorry, little stingray! It was kind of hilarious… but I also decided that I did NOT like how close I was to it without being able to see it.

I swam over to my cousin to say that I was ready to go. She said that she had seen a shark fin and tried to swim after it, but she couldn’t see much, and it disappeared. I got the “I need to get out of this water immediately” feeling, and we sprinted back to the beach. Later, my uncle told us that he talked to some people who had been kayaking where we were swimming, and they said there were TONS of sharks in the water. EEK. It would have been cool if we could see them, but you know how I feel about swimming in water that I can’t see through. Normally, I’m just irrationally afraid that there are sharks. This time there really were! Nope nope nope. Noooo thank you.

We headed back to town with plenty of time to grab our bags and head to the dock before our ferry departed. The entire organizational system for ferry boarding is a disaster, but I’m not going to go into that (you’re welcome). Just know that my calling that mess a “system” is incredibly generous. The chaos drove my engineering mind insane (I have approximately 1000 ideas for how to improve it). We ended up on a ferry with a “floating casino” sort of vibe. The only two windows were blue and dolphin-shaped, casting bluish light across the interior, and the seating was a plush, wavy bench that wound around the perimeter. Before we left, a guy walked around with a roll of plastic bags for anyone worried about getting seasick… hehehe that’s comforting, right? We had a bumpy start, but after the captain came down and moved some people around to better balance the boat, it was much smoother! Thank goodness because the ride was maybe 2.5 hours, and I don’t think I could have taken another ferry ride like the one from San Cristobal to Santa Cruz (where I closed my eyes and pretended that I was totally comfortable while repeating to myself, “You’re fine. Your stomach is fine. No, your face doesn’t feel hot. You don’t feel queasy. I’m sure we’re almost there.”).

Next time, get ready for more adventures on a new island!

Las Grietas and Los Gemelos – explore more of Santa Cruz and learn about the crazy volcanic activity that created some of the island’s most interesting features.

Diamond Beach – check out this beach in Iceland that may give Tortuga Bay a run for its money… though in a VERY different way!