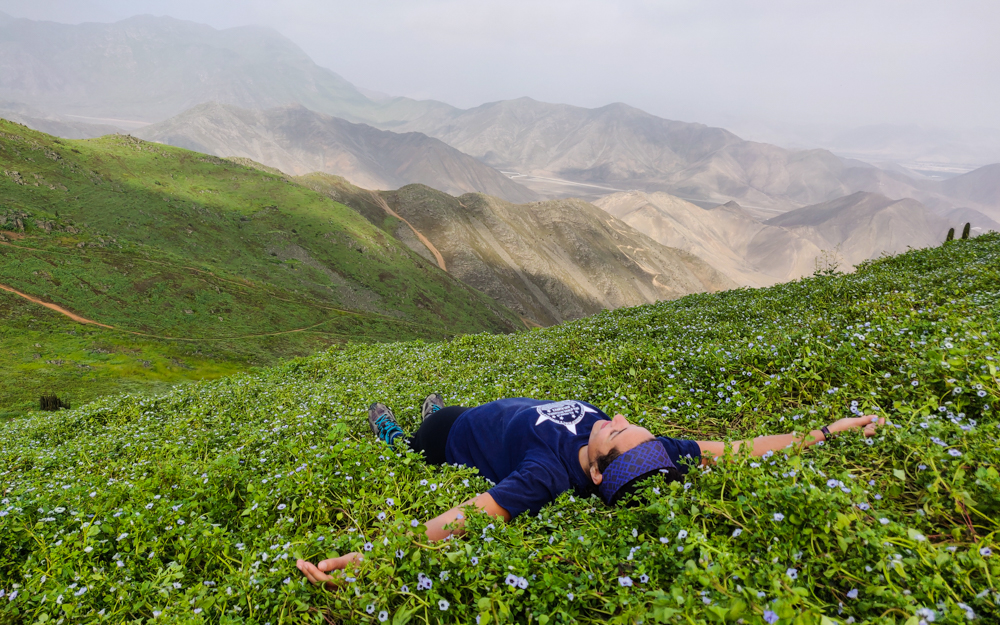 I’m back in Peru! I got in late last Monday night and spent Tuesday wrapping my head around the fact that they poured another floor while I was gone. That’s right, we have a 2-story building now! And even though there are no walls on the third floor, we can walk up there and see what the view is going to be like when it’s finished (the other buildings on the property are only two stories or less, so this is a new experience for us). Essentially, all the third floor means, view-wise, is that we will be able to creep on our neighbors exceptionally well. Like the ones next door who have a pool that we’re all very jealous of (though to be fair, we already knew about that thanks to the drone).

As I was saying, the construction has made big strides since I left. I was a little sad to miss out on some of the fun, but no need to get too upset about it because there’s still much to do. Now, they’re starting to work on the first-floor ceiling on the other side of the building (Module 2). I wasn’t super involved with the foundation phase up until they started the ceilings, but now they’re finally installing electrical-related things which means I have more to do! As they’re laying things out, I’m making sure that everything is in the proper location and that it’s going to work the way I designed it. It’s crazy getting to see it all come together!

I’ve also had fun getting to be somewhat hands-on in the construction process. For example, the electrician came last week to direct the construction crew on where he needs tubes for the electrical wiring, and first, he and I walked around and made sure that we were happy with the locations of the devices. I chalk-marked the walls in the stairwell showing where I want the lights, and he and I talked through some locations for the electrical boxes. This is way more than I would be involved with on a job in the States. There, the engineer essentially just shows the way they want the system to work and then leaves the details to the electrician. Here, I had to include much more installation-related information on my plans, and now, I’m getting to see it all through. How cool!

Besides the construction, things have been nice and chill since I got back… well, with the exception of actually getting back into the country. I had a little scare in the airport on the way in because I’ve already overstayed my welcome for the year. You can technically only stay for 90 days each year without additional paperwork. When the lady at immigration told me I had already exceeded my allowance, I was worried that they were going to put me right back on a plane home! But thank goodness they let me back in, only giving me a 30-day visa instead of a 90-day… which just means that I definitely can’t leave the country again this year until I’m sure that I’m ready to be gone for good, and when I do leave, I’m going to have to pay 60-days’ worth more for the exit fee (that’s the punishment for overstaying your visa, a fee that accumulates for each day beyond your allowed stay).

Aside from that whole mess, though, things have been good. I’m not feeling overwhelmed or overworked (yet). I’m happy to be back working on the project. It’s been a fun week of hanging out with the roommates and getting back into some good habits. I think my trip home came at just the right time, and now I’m back and feeling ready to have a strong finish to my time here.

I want to make the most of the time I have left, so I’m trying to be more proactive about doing things on the weekends. On Saturday, Julie, Jocelyn, and I went on an adventure walk (aka a hike, but Julie thinks that doesn’t sound fun enough). The mountains near where we live are usually nice and brown, adding some extra brownness to the rest of the brown of the desert landscape. Since it’s been such a humid and misty winter, some of the mountains have turned green! I don’t know how so many little plants managed to spawn in such dusty ground, but I’m not upset about it! From a distance, the mountains look like they’ve just gone a bit moldy.

We’re starved for green landscapes here, so we decided to take advantage of this favorable development and investigate. What does that entail exactly? Well, we had to cross over one row of brown mountains before getting to the green ones, so we looked for a path that didn’t seem too exhausting. We walked from our property through our neighborhood and the next one until we got to the foot of a low point between two peaks. I thought maybe that would mean it was easy to cross over. No. I was wrong (rare occurrence, but happens every so often).

It wasn’t “easy”, but we made it over after nearly 30 minutes of walking up a mountain slope that might as well have been vertical. Seriously, it had to be at least a 75-degree incline. And then we had to walk around the mountain on a skinny, slanted path, only one foot-slip away from a tumble all the way down the steep mountainside. The verdict? Not the best route we could have taken, but live and learn!

After that, though, it was heavenly! We learned that the moldy green is mostly wildflowers! There was practically a line separating the brown from the green, and after we crossed over, it didn’t matter how steep the path. We were too busy raving about the smell of plants in the air and the fact that there were actual flowers (no irrigation system required!) and marveling at how much happier we felt being surrounded by green life instead of brown dust. It was magical.

On top of all of that, and I’m sure that I cannot possibly convey the extent of my excitement for this next part, we discovered a new neighborhood gem. One of my favorite things to eat here is cheesy bread… exactly what it sounds like. Cheese + bread = Lara dream meal (I’m very easy to please). Our usual cheesy bread supplier is at least a 15-minute drive away, and it’s been closed for the last couple months with no explanation. BUT we recently discovered that there’s another cheesy bread place just a 15-minute WALK from where we live. We walked there to check it out at the end of our hike, and they have now been quality approved by us. This is life-changing! (no exaggeration… it doesn’t take much) I’ve never meant it more when I say that the future is looking bright!

It’s amazing that it’s taken this long, but I finally got hit with a little wave of culture shock/homesickness. The trip to Darjeeling is definitely what triggered it. The combination of four days of not much “me” time, lots of people not speaking in English, being in an unfamiliar place, and limited contact with people back home added up to me having a VERY grumpy couple of days.

Most of the time, I don’t mind not being able to understand anything. It can even be like a kind of game because even when people are speaking in Hindi or Nepali, there are some words that they say in English either because there’s no translation or just because that’s how everyone says it. Usually, I think it’s fun to try to piece together the sporadic English words and people’s hand motions and imagine what the conversation is about (the conversations that I imagine are probably way more fun than what’s actually being said). It’s good because then I’m paying attention to what’s happening, and people don’t feel like I’m bored or ignoring them (instead, they often think that I understand since I look so engaged).

Like I said, most of the time, I don’t mind, but I learned that even I have my limits. I got especially frustrated when I would hear someone say my name, so I knew that they were saying something about me but then no one translated. I’m sure that no one was ever saying something mean; that’s not the issue. It just gets old very quickly, and it starts making you feel a bit isolated… as if I didn’t already feel a little of that ALL the time. Combine that language isolation with the feeling of separation that comes from being a guest who isn’t asked to do anything, and you’re like a forgotten island. Like imagine that all of the other women are in the kitchen helping to make dinner, but you’re not allowed to help because you’re a guest… so they’re all laughing and having fun working together, and you’re left on your own. It’s nice because they don’t want to make a guest work, but in that moment, you feel like you’d do almost anything just to be included (hence me forcing my way in on momo-making night).

Another thing that starts to get tiring is the politeness of people always telling you to sit or come or this or that. This really threw me off when I first came, and the school coordinator would tell me to sit in her office. I kept thinking that I was in trouble or that she had to talk to me and then she never came back… I finally realized that she was just being polite and trying to give me somewhere to go. This happens everywhere though… every house you visit, every public bench that you happen upon, etc. Sometimes I just want to stand, and when I say that, I get these looks like, “You should really sit. Your legs must be tired. You should sit. Just sit. SIT!” And I’m looking back like, “PLEASE JUST LET ME STAND. I WANT TO STAND. PLEASE. PLEASE. I WANT TO STAND.” And then it’s a… wait for it… stand-off. Hahahahahaha that was great. I’m hilarious.

People are also always asking me if I’m bored or tired which is fine sometimes, but then it will happen when I think it makes literally zero sense to ask. For example, when we were walking around the zoo, someone asked me if I was bored. Huh??? No! I love the zoo! How much stimulation do people think I need to feel interested?? Of all the people in the world, I’d venture to say that I’m up there with the most easily entertained. Put me and babies right next to each other.

You know how once you’re annoyed, EVERYTHING annoys you? That’s pretty much what happened. My irritation level grew and grew until the slightest thing made me want to snap. I knew that it was ridiculous, but sometimes it’s hard to control how you feel. Then, the endless pictures and selfies made it all worse because I feel like I should smile in pictures, but when I’m SO unhappy, making myself smile for a picture feels like a lie. That makes me not want to be in any pictures (at the risk of my grumpy face breaking the camera), and anyone insisting on taking one even after I’ve said “NO!” needs to beware my wrath.

Thankfully, all it took was a couple of days being back in a familiar place and self-imposed solitary confinement to get my head on straight. I’m okay now, but I’m not going to let myself forget that feeling. It all stemmed from me feeling isolated, and that’s a good reminder to always be thinking about making people feel welcome and included in situations where they don’t necessarily fit in.