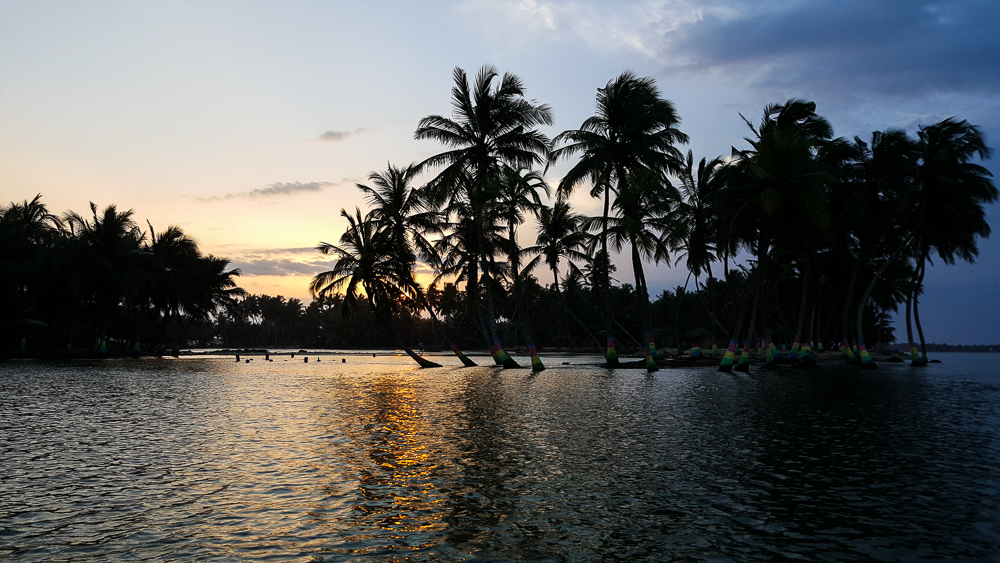 Fernanda leaves us at the end of the week, so she got to pick the location for our weekend travels. Her demands were simple; she wanted to go someplace pretty and relaxing. And so, that’s how we ended up going to Ada Foah. It’s a town in southeast Ghana, next to where the Volta River flows into the Gulf of Guinea/Atlantic Ocean (that’s the same river as the one near where we live in Frankadua). It used to be a big town for trade. At first, it was product trade, but when the African slave trade started, the fort originally meant to defend the trading post was turned into a slave fort. This is where captured people were packed together in dehumanizing conditions meant to either kill them or break their spirits before they were sent to the Americas. After the slave trade was abolished, it became a trading post for goods again.

Now, it’s mostly a weekend getaway for people from Accra. After the Akosombo Dam was built on the Volta River, it became too shallow for large ships and basically crushed any of the trade industry that remained. There are also big issues with the strong tides eroding the coastline to the point where many of the buildings in the town have washed away.

The trek to Ada Foah from our village, like the trek to basically anywhere from our village, is a bit of an adventure, and ours ended up being even more interesting than anticipated. At best, a trip to there from Frankadua would involve two tro tros and one boat ride, but we had to make an extra stop in Accra for Nico to extend his visa. We planned to hang out at the Accra Mall while he took care of that and then go from there.

While we were standing by the road waiting for a tro from Frankadua to the mall/immigration office, the mayor drove by and offered to take us in his car! He said that he was headed to Accra anyway, but I’m not sure that was true. I think he might have gone just because of us which was really nice. We all squished in (four of us in the backseat), and off we went! Two uncomfortable hours (and a few traffic stops where he had to “encourage” the cops to let us go even though there were too many people in the car) later, we made it to the mall, and Avy, Fernanda, and I went snack shopping (my favorite thing) until Nico and Amber finished at immigration and met us for lunch.

The next part of our journey didn’t go quite as planned either… We thought that we would be able to get a tro from the mall to a big transfer point, Tema Roundabout, but everyone we asked said no such thing existed. Hm… so what now? We had no backup plan and were wandering despondently through the parking lot when someone yelled Nico’s name. We’re used to random people calling out to us, but they usually don’t know our names! It turned out to be a guy that Nico and Amber met a couple of weeks ago in Frankadua, Rudolph, and when they explained our situation, he said he was headed in that direction anyway (was he, though?) and could give us a ride. So, the five of us squeezed into Rudolph’s car, and we were off again! The ride was cramped but seriously luxurious because he had air conditioning!!! I don’t think I’ve experienced functional AC since I’ve been here. It was amazing.

At the transfer point, Rudolph walked with us to find the right tro to take to Ada. Finally, from Ada, we took a boat to Ada Foah. You’re probably thinking that this MUST be the end of the story… but alas, it is not. We got probably 95% of the way there, anddd the boat stalled. The captain, Fred, started using some questionable methods to try to start it up again, and we were so close to land that someone from the hotel started walking through the water to us with the intention of pulling the boat in. He was probably 20 meters away (sorry… I’m starting to think in metric now. 65 feet or so) when the boat finally started up again, and we cruised into shore.

Yay!! We finally made it! By the time we landed, it was past dinnertime and no one was hungry anyway, so we just dropped our stuff in our rooms and hung out/played cards until it was time for bed.

​The next day was glorious. Sometimes you don’t realize how in need of a break you are until you get one and are reminded of what it feels like to be relaxed. That’s exactly where I was, and I had the most perfect, relaxing day.

We took our time getting up in the morning (YAY for sleeping in!), ate a leisurely breakfast, and got changed into our bathing suits to go to the beach – 10 feet from our huts.

Oh yeah, I have to tell you about our “hotel”. It’s just a collection of little huts, so we had a three-person hut with a sand floor (aka no floor… just a hut on the sand) and a two-person hut with a floor (luxurious concrete). I think they’re hilarious. Also, sorry, nerd alert but I MUST comment on the electrical situation… There are lights in both huts, but only one has a switch. In the other, we’re supposed to screw the light bulb in and out to turn it on and off. The “fixture” is literally just a bulb hanging from the ceiling by its wires. Where two wires connect, the ends are just twisted together and left exposed. Between huts, the wires are buried under maybe 6” of sand (maybe), and they’re not in tubing or anything to protect them from damage. I could keep ranting about the lights in pretty much the whole country, but I’ll spare you. Maybe another time.

ANYWAY, we decided to go for a walk to explore, starting on the river side of the peninsula and walking around to the gulf side. I understand why people call it a paradise town because man, it really is beautiful. The only downside is that there’s a lot of garbage that washes up on the beaches, particularly plastic garbage. Not surprising considering the general garbage/litter issues around the country… but I digress. Like I was saying, beautiful! At the end of the peninsula, we could see the place where the river water runs into the gulf which was pretty cool.

The rest of the day was equally uneventful. We played some volleyball, swam in the river and played monkey in the middle, and lay on the beach. I made a sand sculpture and took a nap in a hammock and lost to Nico in chess. We watched the sunset and ate dinner, and after everyone else went to bed, Fernanda and I hung out on the beach and looked at the stars. On a clear night, there’s nothing better. Since there are barely any lights around, the sky is super dark and the stars are incredible.

I’m really bummed that Fernanda is leaving next week… I think I’m still in denial a little bit. We get along so well and have a lot in common. But Mexico City isn’t TOO far from Philly, and she’s promised me a piñata if I come to visit, so it looks like it’s time for me to start planning a trip to Mexico!

The next morning, we ate breakfast and started the long trip home to Frankadua. I didn’t even mind, though. I felt so refreshed after our day of relaxation that I actually really enjoyed the (very long) ride.

Step 1: Another boat ride with our friend Fred! This one went without a hitch, and he promised to come visit us in Frankadua. This happens pretty much everywhere we go… it’s kind of funny. Thank goodness for Ghana SIM cards because then it’s not a big deal to give out our phone numbers. When we leave the country, they’ll disappear.

Step 2: Tro ride. We walked from the dock to the station in town, and when we found it (after asking a bunch of people for directions), there was no one there. Great. Time to ask more people for help! We walked out to the street and started asking around until someone finally directed us down the road because apparently tros don’t run all the way to the station on Sundays. Of course. Because why would they? *internet sarcasm*

We found a tro, and I got a prime seat – back row by the window. That meant that I didn’t have to move for anyone to get on or off, and I got a great breeze. I’m telling you, it gets HOT in those vans, and it was very sunny which doesn’t help. Everyone else slept, but I was happy to look out the window and enjoy the ride.

Step 3: Tro transfer at Tema Roundabout. Maybe? We assumed that we could get a tro direct to Frankadua from there, but everyone we asked said that there was no such thing and that we had to take a cab to some other station and get one from there. It’s so hard to tell when people are being helpful vs. trying to take advantage of our ignorance (since we’re so obviously not from here). Who knows what the truth was in this case, but we decided to assume “being helpful” and took a cab to the random station.

Step 4: Tro from random station to Frankadua (FINALLY!). I lucked out again on my seat and was in the front next to the driver which means 1. more legroom and 2. a window AND the windshield. A breeze and a view. What more could you want? Well, a seatbelt would be nice, but I’ll take what I can get! Sometimes you luck out on that, too, but more often not. I’ve been working on not having an anxiety attack every time I get in a vehicle without one.

Two hours later (as in, two hours after the beginning of step 4), we were home! We survived! The Cape Coast crew got back maybe 20 minutes after us, and the rest of the night was spent exchanging stories and getting ready for school the next day. Last week of summer school… eek!

*Note: This blog has been updated since its original posting to combine three posts into one.

Batumi – compare the sand beaches of Ghana to the pebble beaches of Batumi, Georgia. The perfect solution for the beach-loving sand-haters among us!

Lake Bosomtwe – canoe around this crater lake, the largest natural lake in Ghana