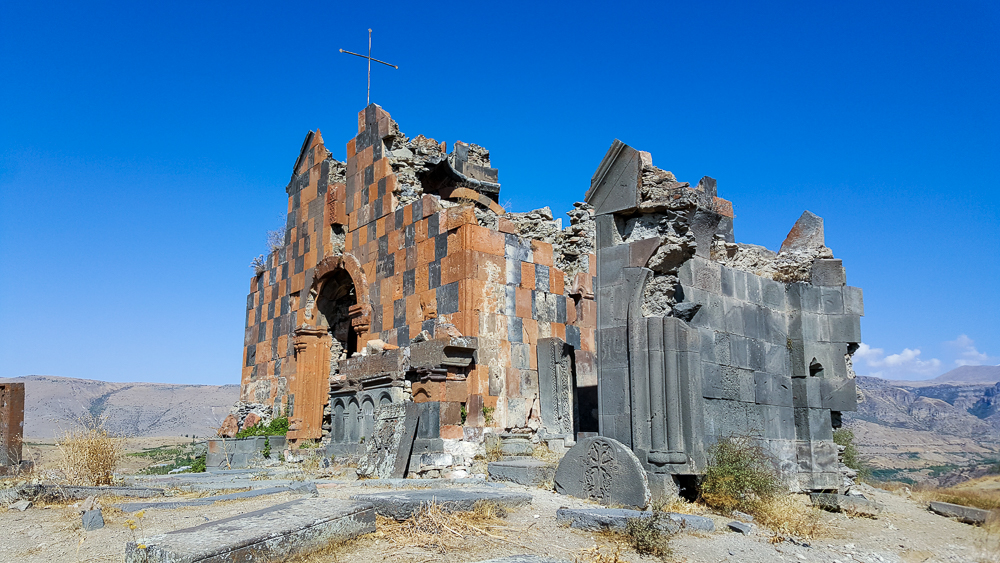 Victoria and I decided that we wanted to go on a Saturday adventure, so we planned a mini-excursion to visit Havuts Tar Monastery. It was on my list of places to go because I read that the view is great and it’s worth a visit even though it’s in ruins. The location was also very convenient… It’s just a short hike away from the town of Garni, and the marshrutka ride from Yerevan to Garni takes less than an hour.

I wasn’t so sure about the logistics of hiking there because it’s located inside of Khosrov Forest State Reserve. It’s one of the oldest protected areas in the world, supposedly established by King Khosrov in the 330s. I think he just wanted something to name after himself. It was re-established in its current form in 1958. There are four different landscapes within the park, ranging from desert to alpine meadow, and a ton of different plant and animal species. There are 41 mammal species!

The Khosrov website makes it seem like coordinating a visit to the park is a huge pain. It says that you have to hire a guide and get a permit if you want to hike in the park, and it’s a bit expensive. In all of the reviews I read about Havuts Tar, no one said anything about a guide. Who the heck knows which one is right? The best way to figure anything out is to just show up, so that’s what we planned. We figured we would go, try to visit, and be prepared for a last-minute change of plans if we weren’t allowed into the park.

Our marshrutka dropped us in the center of Garni, and from there, we started walking in the general direction of the park. Oh yeah, we also weren’t exactly sure about how to get there… but hey, it’s all part of the adventure, right? It took a few near-wrong turns and some helpful directions from locals, but we eventually found what looked like a trail and started hiking. Thank goodness for GPS because otherwise, who knows where we would have ended up? It seemed for a while like we weren’t going to encounter anyone… until we turned a corner and saw a huge gate with a Khosrov seal on it. Okay, showtime. Worst case, we’d get turned away and have to find something else to do. No big deal.

There was a park ranger sitting at the gate, and we said hello and told him that we wanted to see Havuts Tar. (We had practiced saying this in Armenian on the walk so that we would sound like we knew what we were talking about.) He didn’t seem thrown off by our presence or our request and asked where we were from. We said Yerevan, and he told us that it’s 1000 dram to hike there if you’re from Yerevan and 2000 dram if you’re a foreigner, so lucky for us that we’re not foreigners because we get a better price. I think he winked at us when he said that, but I have no idea why because we definitely were passing as locals.

We went into the little visitor’s center to pay, and they had a sign with pricing for all of the different sites within the park. To me, that seems to mean you don’t need a guide… Oh, who knows. Maybe it’s like some local secret that you can just walk in, but they try to trick the internet users into getting a guide? Anyway, I was surprised by how nice the visitor’s center was. They had posters about the different sites in the park, information about environmental preservation, a creepily impressive beetle collection, and best of all, a bathroom.

Victoria and I paid our 1000 dram each and headed up the trail to the monastery. The hike wasn’t bad at all. There were some steep parts, but we were following a dirt car road, making it impossible to get lost. There were even a few shade trees along the way! That’s a rare sight on a hike here.

Havuts Tar Monastic Complex was built between the 11th and 13th centuries, so in Armenia time, it’s new! There was an earthquake in 1679 that destroyed much of the complex, and after that, it was basically abandoned, aside from some minor restoration efforts in the 18th and 20th centuries. There’s another church there as well, Amenaprkich Church, which is just outside of the walled complex and was originally built in the 10th century.

The ruins were a pleasant surprise. Everything I read basically said that the monastery is unimpressive, but the view makes the trip worth it. I completely disagree with the first statement. It was beautiful!! The ruins were way more extensive than I expected. There were fortified walls, hidden underground rooms, and some of the best stone reliefs I’ve seen in Armenia. As we wandered around, Victoria and I couldn’t help but express our disbelief at the fact that anyone would say that the monastery was anything less than awesome.

The view certainly wasn’t anything to complain about either. It overlooks the Azat River Valley, the same one that runs behind Garni Temple, and the whole thing is pretty spectacular. From Amenaprkich, you can see Garni Temple too! We found a shady spot to eat our snacks (some bread, cheese, and cookies, courtesy of Victoria), chatted, and enjoyed the scenery.

It’s always nice when a day turns out even better than you expect. I was worried that we wouldn’t even be able to enter the park and I would have dragged Victoria out there for no reason. Far from that, we had a great time! Havuts Tar is pretty close to the top of my list of favorite places to visit in Armenia, along with Dilijan, Levon’s Divine Underground, and Smbataberd. I think my list of favorite places is slightly more obscure than most people’s…

Dilijan National Park – go for a hike in one of Armenia’s national parks! Or, for the autumn version, go here

Sergei Parajanov Museum – visit my favorite museum in all of Armenia